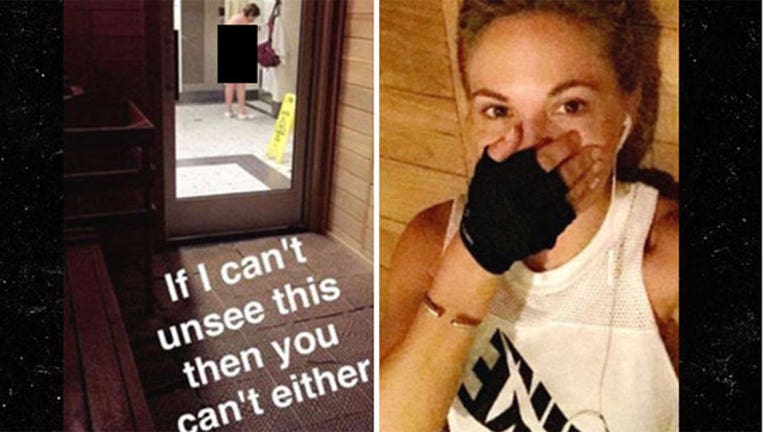 Playboy model Dani Mathers is being slammed on social media for posting a Snapchat of a nude woman in the gym without her consent.

NEW YORK (FOX 5 NY) - Playboy model Dani Mathers is being slammed on social media for posting a Snapchat of a nude woman in the gym without her consent and police are investigating the incident.

The unsuspecting woman was at the L.A. Fitness in Los Angeles recently when Mathers posted, "If I can't unsee this then you can't either."

Next to the photo is a selfie of Mathers holding her hand over her mouth and apparently laughing.

Detectives from the Los Angeles Police Department's sexual assault section are reportedly investigatingLos Angeles police were investigating after a Playboy model took a photo of a naked woman in a gym locker room and posted it to social media with insulting comments about the woman's body, authorities said.

To look “with the intent to invade the privacy of a person” into places like a changing room, where a person has “a reasonable expectation of privacy,” with a camera is a misdemeanor.

The gym, LA Fitness, reported the posting to police and has revoked Mathers' membership.

"Her behavior is appalling and puts every member at risk of losing their privacy," said Jill Greuling, the company's executive vice president of operations.

The company would not say at which gym the incident occurred. The woman in the photo was not identified and it was not clear if she knew she was being photographed.

The 2015 Playmate of the Year tried to apologize with a video.

"Please believe me when I say I'm not that type of person," said Mathers.

L.A. Fitness has banned Mathers and she has also reportedly been indefinitely suspended from her job at a local radio station, reports the Washington Post.