OAKLAND, Calif. - A 10-year-old Oakland girl is demonstrating what it means to play like a girl.

From cheerleader to all-star football player, Mia Poe sees no limits to what she can do, according to her family. 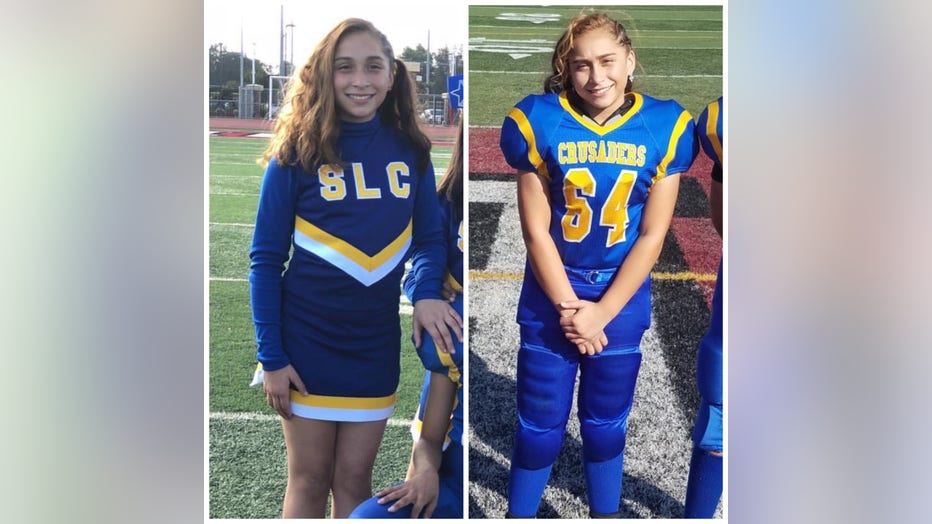 From cheerleader to all star, Oakland 10-year-old, Mia Poe was the first girl to make all-star roster from her football team, the San Leandro Crusaders. (Darryl Poe)

On Saturday, she showed up "beast mode," made several tackles against her male opponents, and helped her team win in the East Bay Youth Football Conference all-star game at Tennyson High School in Hayward.

Not only was she the only girl on her team, she was the only female player in the game. And that did not hold her back or intimidate her in any way, according to her father. If anything, it fueled her. "I think she was empowered by it," dad Darryl Poe told KTVU. "She likes to show what women can do." 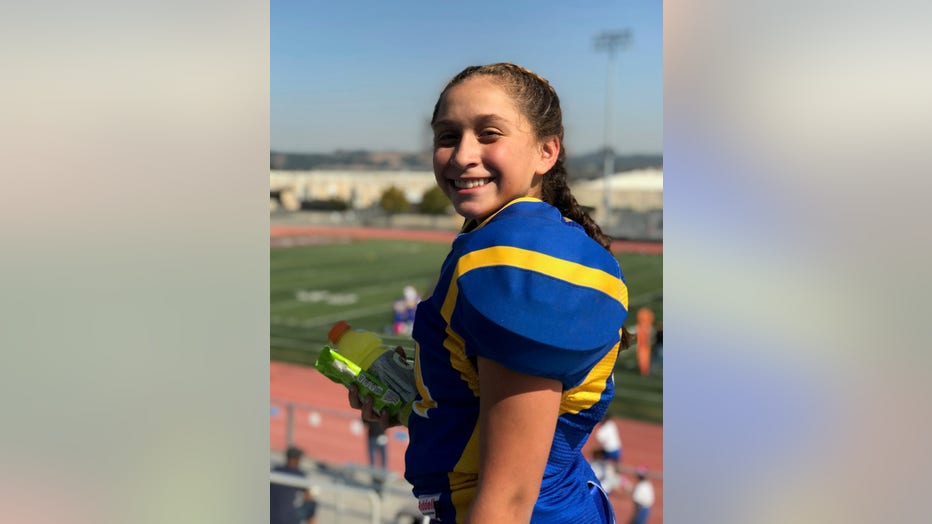 The game marked the end of Mia's first year with the San Leandro Crusaders. The rookie was one of six players from her team to make it on the all-star roster for the National team, which consisted of players from the Hayward Lancers, Union City Colts, Milpitas Knights, and San Jose Pal.

With the help from some girl power, the National won 13-to-6 against the American team, made up of all-stars from the San Ramon T-Birds, San Ramon Bears, Clayton Valley Jr. Eagles, and Martinez Bulldogs.

"She did great!" Darryl Poe said of his daughter, boasting, "She had a couple of tackles."

Prior to putting on the football pads and helmet, for the past five years, Mia wore a cheerleading uniform for the Crusaders, where her big brother has also played.

"She was always there for him and always cheering for him," Darryl Poe explained.

Then one day, Mia told her family that she wanted to step off the sidelines and get on the field.

So with help from big brother, who practiced with her and prepare her for try-outs, Mia made the team. And once she started playing the game, there was no stopping her. She became a valuable asset to the team.

"For the San Leandro Crusaders, she was actually the only female that was able to play the whole season," her dad explained.

So when she found out all of her hard work won her a spot on the all-star team, she was overjoyed. "She knows that she played her heart to get there," said Poe. "When she heard her name on the roster for the all-star game, she was in shock, and she cried." 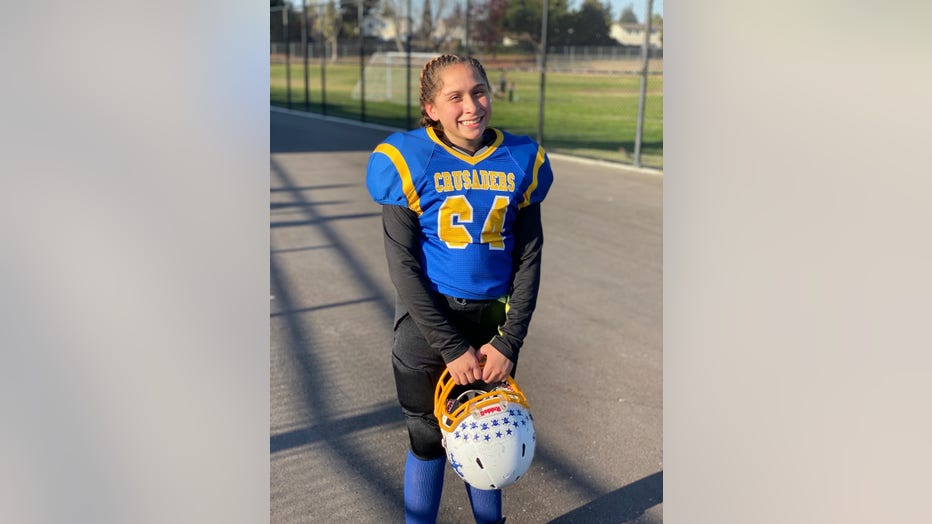 It's that passion that drives her on the field and in whatever she sets out to do. Her dad noted that his daughter, the football player, hasn't shed the spirit of the cheerleader in her. For Mia, the two don't cancel each other out.

"She loves interacting with the kids, with the other cheerleaders, even though she is a football payer," explained Poe. "And if you ever watch her, you'll actually see her cheering on the sidelines of her own game."

He also explained that on the field, Mia plays aggressively and confidently but with compassion. "When she takes the other person down, she sincerely picks them up and helps out the other teammate," Poe said.

Mia's father admitted that he couldn't help but worry that his daughter would get hurt out there on Saturday. But as she has demonstrated time and time again, she proved that she can hold her own.

He said he and his wife couldn't be prouder. In fact, mom rushed the field after the game to celebrate their girl. Once dad caught up, he said to her, "Congratulations. You did an excellent job."

And when asked what his daughter's response was, the proud dad said she simply smiled. 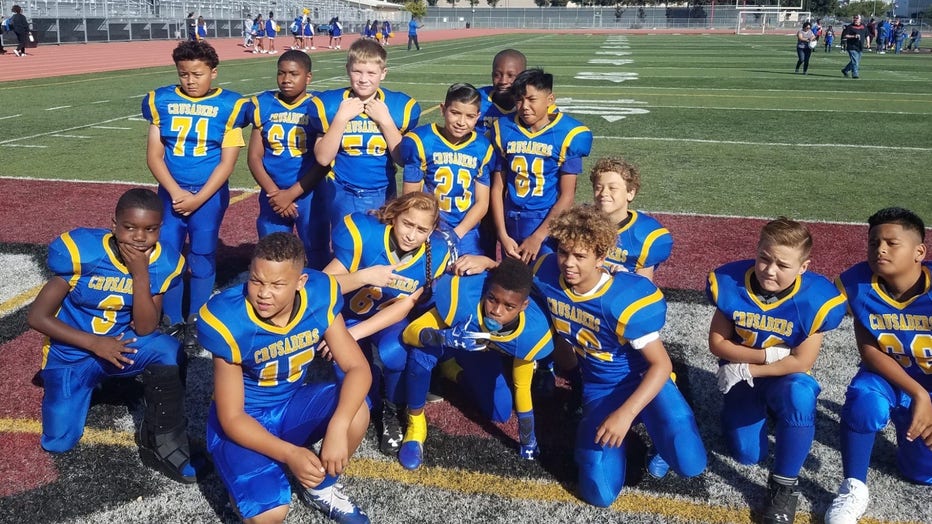 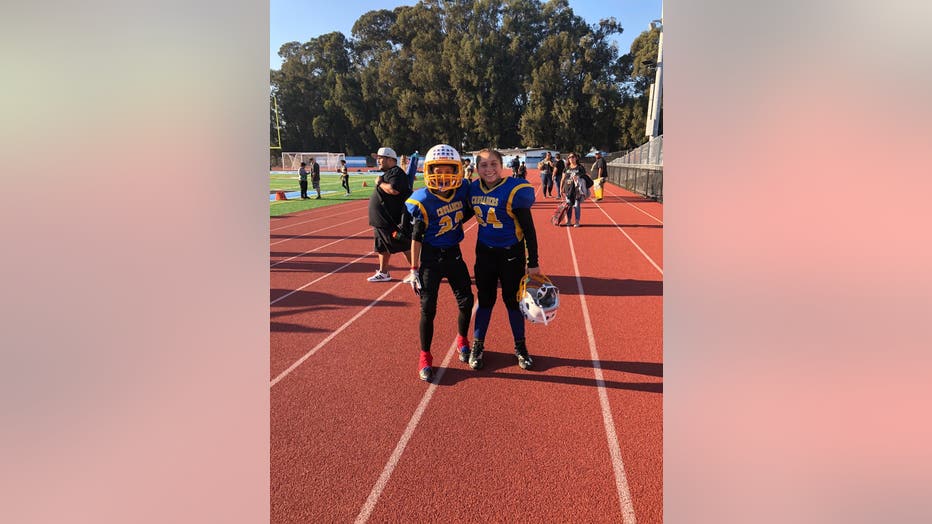