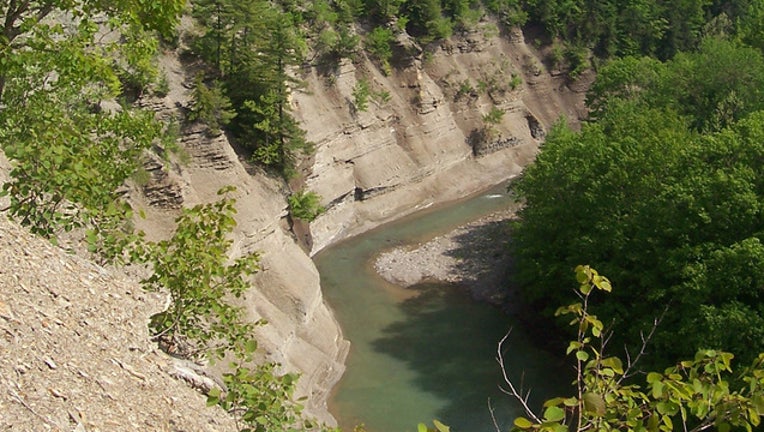 The Cattaraugus Creek's South Branch in the Zoar Valley Multiple Use Area (Adapted from Antepenultimate/CC BY-SA 4.0)

When William and Amanda Green took their two boys on a weekend outing, they headed for the Zoar Valley Gorge, a rugged area not far from their Buffalo, New York, home that includes waterfalls, forests and cliffs that plunge as much as 40 stories.

But a summer hike turned tragic when both parents were found dead Sunday near a creek at the bottom of the gorge. Their 4-year-old son, Alexander, was nearby with severe injuries, and their 7-year-old, Jacob, though less severely injured, was found hours later wandering the gorge floor alone.

Police on Monday were still trying to piece together exactly how the tragedy unfolded, though they said it appeared that the parents and Alexander fell about 200 feet (60 meters) down the cliff.

"It's sheer. It drops straight down," Erie County sheriff's spokesman Scott Zylka said of the area where the family was found.

"It is a gorge," added Capt. Daniel Richter, a New York state forest ranger. "It's like anything else. You don't want to get too close to the edge. There have been accidents. There have been fatalities. It's just the nature of the area."

The valley is a popular hiking and kayaking spot 35 miles (56 kilometers) south of Buffalo. With shale cliffs and the whitewater Cattaraugus Creek running through the gorge, it can attract hundreds of visitors on a typical summer day.

According to Erie County Sheriff Timothy Howard, two hikers trekking through the bottom of the gorge came across the Greens' bodies. The injured 4-year-old was nearby.

"The first two hikers who found the bodies did not have a cellphone," Howard said. "They flagged down a third hiker who made the call."

A sheriff's helicopter made a dangerous landing on the gorge floor and evacuated the 4-year-old as emergency crews and police descended the cliff face. Rescuers searching the area for clues found sneakers and footprints that were too big for a 4-year-old.

Around that time, authorities learned from relatives that four members of the Green family had gone to the gorge.

More searchers were brought in, and a sheriff's detective later found Jacob walking in the area. It was still unclear Monday if the older boy fell along with his parents and brother.

Alexander was listed in guarded condition Monday at a Buffalo hospital where he was being treated for internal injuries, fractures and a head injury. Jacob was taken to the same hospital and was in good condition with a broken right arm and ankle.

William Green, 33, and his wife Amanda, 35, both had active Facebook pages that show them as doting parents on outings with their boys, riding bumper cars at the county fair, crossing a rope bridge at the Buffalo Zoo and sitting among dozens of pumpkins. Alexander poses with a homemade firetruck cake at his fourth birthday party, where he wears a fireman's hat and fake mustache.

"This tragic event has left us with empty hearts and without words," said a statement released on behalf of the couple's relatives by Amanda Green's employer, BlueCross BlueShield of Western New York. "While the details of yesterday are still being discovered, we want to remember Amanda and William's legacy as two parents that loved their children dearly."

Although a marked hiking trail runs along part of the gorge's rim, authorities did not know if the Greens were on it at any time during their outing.