After Jorge Alfaro lined out to Freeman to end the game, Braves players hugged on the field and exchanged high-fives in the dugout. 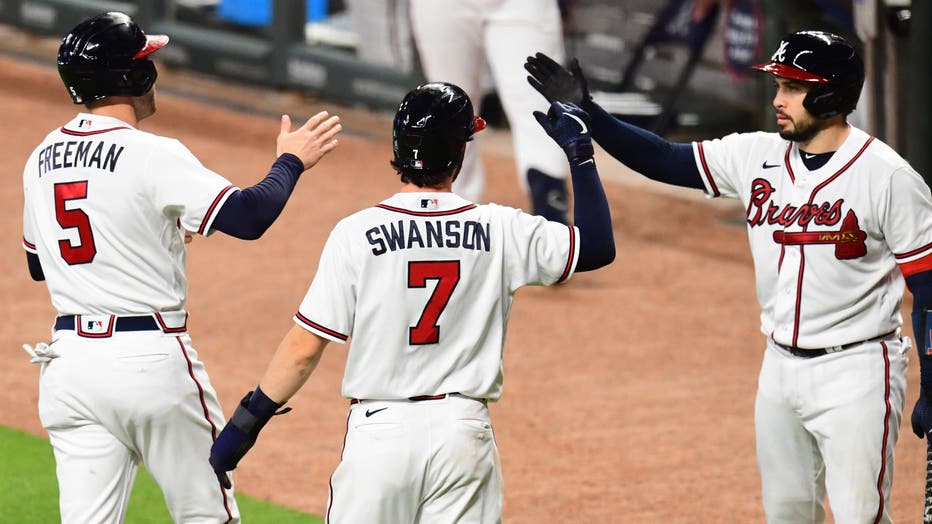 Freddie Freeman #5 and Dansby Swanson #7 of the Atlanta Braves are congratulated by Travis dArnaud #16 after scoring in the fifth inning against the Miami Marlins at Truist Park on September 22, 2020 in Atlanta, Georgia. (Photo by Scott Cunningham/Ge

Wilson (1-0) allowed three hits and one walk, striking out a career-high seven. It was an unexpected showing by the 22-year-old right-hander, who had a 7.04 ERA in four relief outings and had been at the team’s alternate training site until Monday. He had not started since July 16 last year at Milwaukee.

Atlanta clinched its record 20th division title, one more than the New York Yankees. The Braves won 14 straight in completed seasons from 1991-2005 but have not won a postseason series since 2001 and have not won a championship since 1995.

Miami remained in position to earn its first playoff berth since winning the 2003 World Series.

Ozuna hit a first-inning homer off José Ureña (0-3), who allowed four runs in six innings. Ozzie Albies homered in the second, and Ozuna added a two-run double in the fifth and drove in Freeman with a 450-foot homer to center field in the eighth.

Starling Marte led off the sixth with a homer off Josh Tomlin.

Marlins: INF Sean Rodriguez, who was designated for assignment on Sunday, has cleared waivers and reported to the alternate training site in Jupiter.

Braves: Wilson is the 13th starting pitcher for Atlanta this season. He was recalled on Monday when LHP Cole Hamels was shut down with left shoulder fatigue after making only one start. 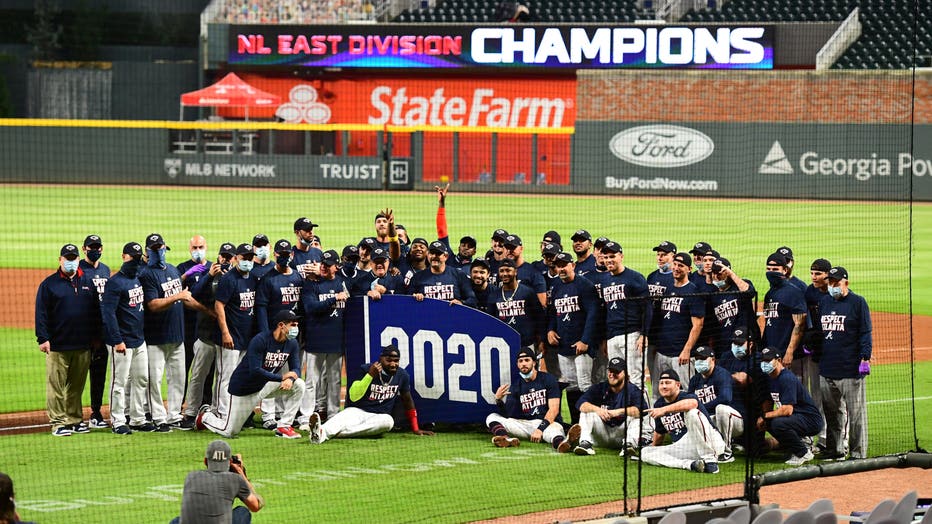 Members of the Atlanta Braves celebrate after winning the NL East Division title against the Miami Marlins at Truist Park on September 22, 2020 in Atlanta, Georgia. (Photo by Scott Cunningham/Getty Images)

Snitker said the Braves were prepared for a low-key celebration, due to social distancing rules in the pandemic. He said Major League Baseball “pretty much restricted all that” due to space constraints in the clubhouse.

“I think we go in and air high-five to everybody,” Snitker said.

Marlins: RHP Sixto Sánchez will look for his second win over the Braves in about two weeks on Wednesday night. He allowed only three hits in six innings in an 8-0 win at Atlanta on Sept. 8.