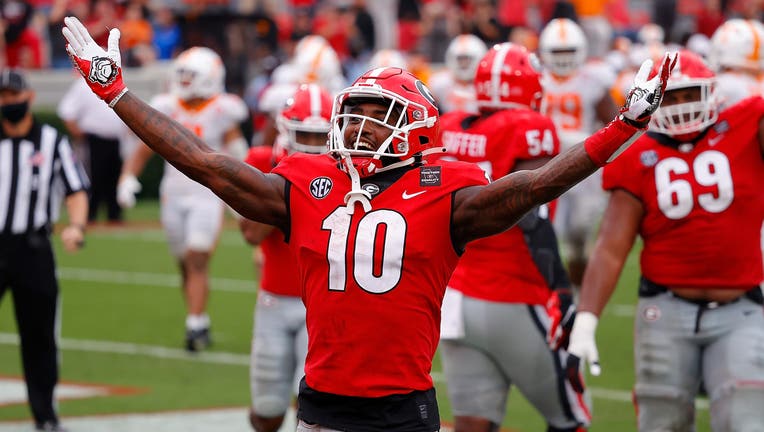 Kearis Jackson #10 of the Georgia Bulldogs reacts after a touchdown reception against the Tennessee Volunteers during the second half at Sanford Stadium on October 10, 2020 in Athens, Georgia. (Photo by Kevin C. Cox/Getty Images)

ATHENS, Ga. - Tennessee charged off the field at halftime, seemingly holding all the momentum.

But there were still two quarters to go.

That time belongs to Georgia.

Bouncing back from a goal-line stand at the end of the the first half, the No. 3 Bulldogs dominated the final 30 minutes to beat the No. 14 Volunteers 44-21 Saturday.

Stetson Bennett threw two touchdown passes and ran for another score, while the defense forced three turnovers — returning one of them for a TD — and held Tennessee to just 71 yards total offense in the second half.

“We know we’re a second-half team,” said linebacker Azeez Ojulari, who got the turnover ball rolling.

The Bulldogs (3-0) defeated a ranked Southeastern Conference team for the second week in a row, shaking off a 21-17 deficit to become the first team in 10 years to win two games in a season by at least 20 points after trailing at halftime.

Georgia also trailed midway through the season opener at Arkansas, but romped to a 37-10 victory.

This was essentially a repeat.

“We didn’t blink,” coach Kirby Smart said. “We’ve got a very emotional team. In the locker room, a lot of emotions were shown.”

Georgia took out that emotion on Tennessee (2-1), which showed it’s not ready to compete with the league’s top programs.

“They really outplayed us in the second half,” coach Jeremy Pruitt said. “You can’t turn the ball over three times against anybody and expect to win.”

Bennett ran for a 10-yard touchdown in the first half, hooked up with Kearis Jackson on a 21-yard scoring pass in the final minute of the third quarter, and sealed the victory with a 1-yard TD flip to 305-pound nose tackle Jalen Carter, who was supposedly in the game as an extra blocker.

For good measure, Monty Rice stripped the ball away from quarterback Justin Guarantano, scooped up the loose ball and ran 20 yards for a fitting epitaph to Georgia’s defensive dominance as darkness fell over Athens.

Fittingly, Guarantano was sacked on the final play of the game.

Bennett, the former walk-on making his second straight start for the Bulldogs, completed 16 of 27 for 238 yards. Jackson hauled in four passes for 91 yards. Zamir White added a 1-yard scoring run.

Tennessee seemed to have all the momentum at the end of the first half. The Bulldogs drove inside the Vols 1 and had two shots to ram it into the end zone, inserting Carter to provide another massive blocker at fullback as well as 320-pound nose tackle Jordan Davis at tight end.

But Tennessee stopped White short of the goal line on two straight runs, charging off the field in celebration after the second stop ended the half.

All those good feelings evaporated when Tennessee turned it over on its first two possessions of the second half.

Guarantano was sacked by Ojulari and coughed up the ball, with Ojulari also making the recovery.

“That was pretty big,” Ojulari said, “We needed that coming off halftime. We definitely needed to shift the momentum of the game.”

Then, under heavy pressure, the Tennessee quarterback wobbled one up that was intercepted by Eric Stokes. Tennessee’s defense held Georgia to a pair of field goals after those miscues, but the Vols offense just couldn’t get anything going.

Tennessee led after a wild first half that included plenty of mistakes by both teams. Guarantano hooked up with Josh Palmer on two touchdown passes.

The Bulldogs started the parade of errors on the second snap of the game, which soared over Bennett’s head while he was lined up in the shotgun. Bennett couldn’t corral the ball at the 1, and Tennessee’s Kivon Bennett fell on it end zone for a touchdown.

Tennessee: The Vols’ eight-game winning streak was snapped, and Pruitt was denied a much-needed victory over one of the conference’s top programs. The Vols’ rebuilding job still has a ways to go, at least when it comes to competing for an SEC East title. Asked what his team needs to do to close the gap, Pruitt replied, “Don’t turn the ball over three times in one half.”

Georgia: Bennett had some shaky moments, but certainly did enough to show that he deserves to hang on to the starting job. The defense is truly special, so the Bulldogs should be able to compete with most teams as long as the running game can produce some yardage and Bennett doesn’t make any major mistakes.

While it didn’t matter in the end, Georgia made plenty of mistakes that irritated Smart.

In addition to the early turnover, receiver Georgia Pickens was penalized for unsportsmanlike conduct when the offense wasn’t even on the field. He apparently squirted water on Guarantano after the quarterback was shoved into the Georgia bench.

The Bulldogs also were penalized for two players running off the bench without their helmets to celebrate Carter’s TD in the end zone.

“What are you thinking?” Smart said. “When your buddy scores, celebrate on the sideline.”

Georgia: Now, it’s on to what could be one of the games of the year — a trip to Tuscaloosa to face No. 2 Alabama. For the Bulldogs, it will be their third straight game against a ranked opponent, and surely the toughest challenge yet.

“I cannot give enough credit to what it’s like to play week in and week out in this league,” Smart said. “It’s something else. There’s so many good football teams.”