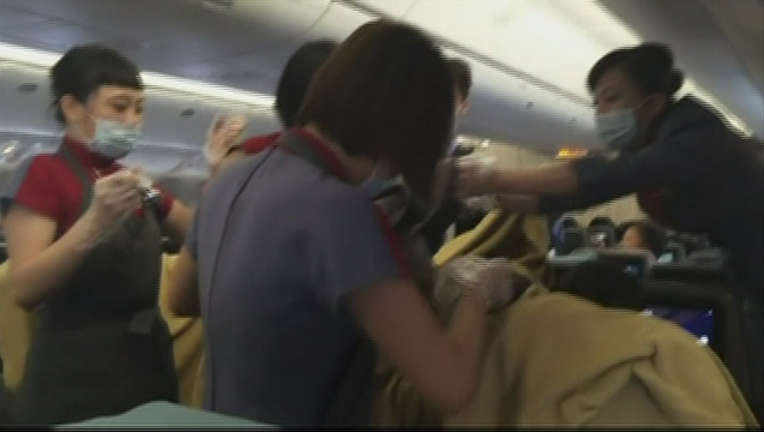 LOS ANGELES (AP) — It was a honeymoon that Dr. Angelica Zen likely won't ever forget, and not just because of the romantic Bali vacation.

On her way home to Los Angeles last week, the UCLA physician made her first unassisted delivery of a newborn baby when a passenger suddenly went into labor over the Pacific Ocean.

The China Air flight, which had departed from Taiwan, was diverted to Alaska. Mother and newborn daughter left for a hospital, and the flight continued on to Los Angeles.

"When the baby came out healthy, I was just very relieved," Zen, back at work at UCLA on Thursday, said laughing.

The fourth-year resident had previously delivered two infants, both under the supervision of more experienced doctors.

"Usually I see adult patients, older patients and pediatric kids," she said, adding this was "definitely outside of my job description."

Zen had been trying to catch a little sleep toward the end of her 14-hour connecting flight from Bali last week when she heard an announcement asking if there was a doctor or nurse on board.

"They initially told me it was just a lady having some abdominal pain, so I thought it was going to be something simple," she told The Associated Press. "But when I saw her she was, like, very pregnant."

The woman was seated in the plane's first-class section, where the desks made it impossible to work, so Zen had her moved to the main cabin and placed on the floor. The flight attendants quickly pitched in, providing towels, blankets and makeshift instruments as fellow passengers recorded videos with their phones.

"The baby got delivered, and everybody applauded," said passenger Edmund Chen, who filmed part of the delivery from his seat one row behind.

The video, shared with The Associated Press, shows a half-dozen flight attendants wearing surgical masks and speaking Mandarin as they help Zen. The attendants and passengers break into cheers and applause when the doctor hands the crying newborn to one of the attendants.

"I don't really like to video other people, but this was just a once-in-a-lifetime thing, you know," Chen said. He added he was amazed that when, just like in the movies, the crew asked if there was a doctor on board one stepped forward.

Zen said her new husband, an engineer, stood by ready to help, but she didn't ask him. "I think he was more nervous than I was," she said.

It's unclear if the birth, first reported by KABC-TV, occurred within a 12-mile radius of Alaska, which would make the baby a U.S. citizen.

Airport officials wouldn't say how close the plane was to landing, but Zen noted it was making its approach when the baby arrived. "It was right when we were descending that the baby crowned," she said.