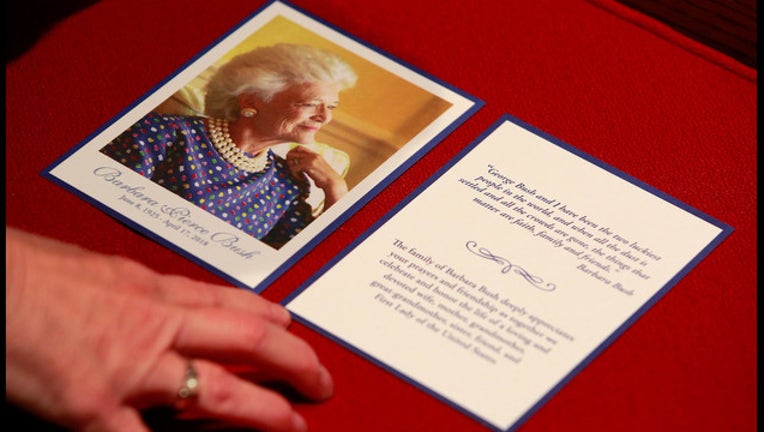 HOUSTON (FOX 26) - Family, dignitaries and invited guests attending the funeral of former first lady Barbara Bush today at 11:00am Saturday at St. Martin’s Episcopal Church in Houston will experience an Easter Liturgy that celebrates her singular life of service and devotion to her family and countless friends.

Following the funeral service, the Bush family will proceed by motorcade to the George H. W. Bush Presidential Library in College Station, Texas for a brief, private interment ceremony.

The following is a rundown of the day:

10:45 AM    Prayer led by Russ Levenson in Bagby Parish Hall for First Families:

Bush granddaughters and grandchildren’s spouses are escorted to their seats:

12:30 PM    The remains will be carried from the church by the grandsons.

Motorcade route when departing St. Martin’s: The motorcade proceeds east on
Memorial Drive through Memorial Park. Just east of the park at Westcott, turns
left and then merges onto I-10. The route through the park will be publicized, so
Houstonians may pay their respects.

Mrs. Bush’s casket will be removed by military support. Family gathers behind casket.

The procession will proceed in the following order to the gravesite:

Once the procession has passed over the bridge and is approaching the pavilion, The Singing Cadets, prepositioned at gravesite, will begin singing.

The procession continues through the woods to the gravesite.

Once the casket is placed on the bier, The Singing Cadets will conclude their musical selection.
They will then quietly depart.

A private interment service will be conducted by The Reverend Dr. Russell Levenson and
The Reverend Peter Cheney.