Supports of the bill argue it's in the best interest of women's health. Opponents say the bill is influenced by misinformation.

ATLANTA - The Georgia Senate Health and Human Services Committee approved a bill that bans the delivery of abortion pills by mail and requires in-person exams.

The hearing, for the bill that imposes restrictions on abortion medications, lasted about an hour. The bill was approved along party lines.

In December, the Food and Drug Administration permanently loosened restrictions on abortion pills, including the requirement for abortion pills to be picked up in person.

The bill advances to the Senate Rules Committee, which will decide if it will get a full Senate vote.

Senate Bill 351 would require that a patient sign off on 15 individual statements including a claim that the pills can be reversed by taking the hormone progesterone. The American College of Obstetricians and Gynecologists says there’s no systematic proof of that.

Republican Sen. Bruce Thompson introduced the bill and said in December it’s too risky for physicians to dispense the pills without an in-person exam. 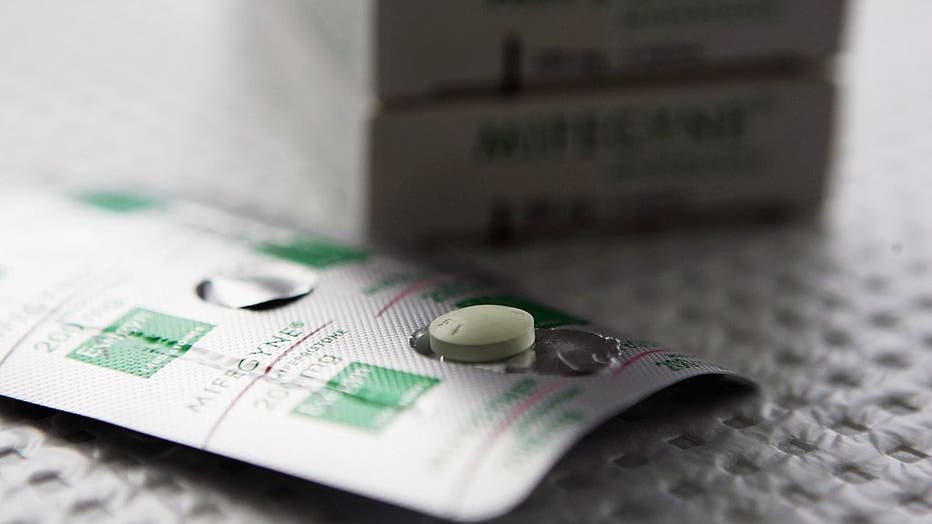 The abortion drug Mifepristone, also known as RU486, is pictured in an abortion clinic February 17, 2006. (Photo by Phil Walter/Getty Images)

Supporters of abortion rights previously promoted a legislative resolution that would go in the opposite direction, reaffirming abortion availability in Georgia.

"We need to continue to reframe this issue," said Rep. Park Cannon. "Access to abortion in Georgia is supported by 70% of voters and the elected officials are playing games with health care during a pandemic."

Currently, abortion pills can be prescribed in Georgia 24 hours after a telephone consultation by a physician or someone working for the physician. No physical exam has to be performed.

Also known as the "Women's Health and Safety Act," the bill seeks to provide extensive requirements for obtaining abortion medication.

The bill argues the risk of complications from using mifepristone to terminate pregnancy warrants regulation. The bill allows for physicians to implement "rescue" treatment with progesterone, which sustains pregnancy.

The bill requires physicians to obtain an informed consent authorization form from a patient before any attempted abortion procedure. The form provides procedural steps, a list of risks, the gestational age of the child and a list of developmental characteristics, including the presence of a heartbeat, the ability to react to painful stimuli, and the development of organs, appendages and facial features.

The bill requires facilities that perform abortions and prescribe medication to provide a report of each medical or drug-induced abortion.

The bill has 24 cosponsors.