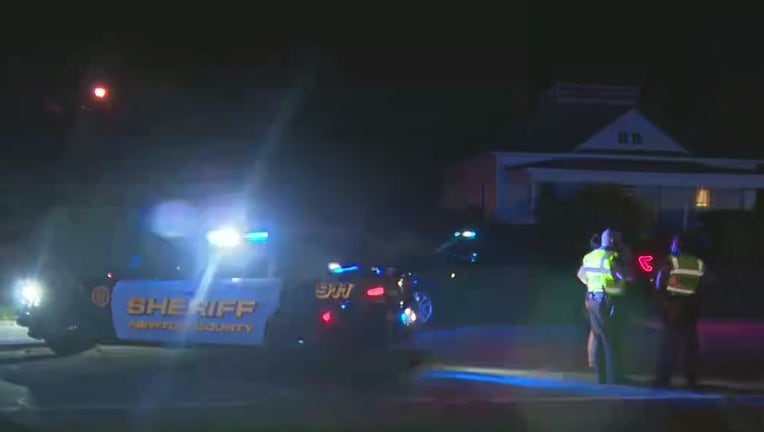 The GBI is investigating a deputy-involved shooting in Covington. (Photo: FOX 5 Atlanta)

COVINGTON, Ga. - The Georgia Bureau of Investigation has identified a man killed in a standoff with deputies at a home in Covington.

Officials say the shooting happened at home on the 3400 block of Ga. Highway 162 in Covington around 8:30 p.m.

Hours before the shooting, the GBI says deputies with the Newton County Sheriff's Office were searching for 27-year-old Alexander Matthew Collins. Deputies tracked Collins, who had outstanding warrants charging him with aggravated assault, false imprisonment, and pointing a gun at another person, to the home around 6:20 p.m.

Instead of surrendering to police, officials say Collins barricaded himself inside the home, leading to a SWAT Team being called in.

After multiple hours of negotiation, Collins came out of the house. When deputies tried to take him into custody, the GBI says Collins pulled out a gun and fired at deputies, hitting one.

Another deputy returned fire, hitting Colins. He died from the injuries at the scene.

Officials said a wanted man is dead and a Newton County Sheriff's Office deputy is recovering after an exchange of gunfire in Covington. Officials expect the deputy to fully recover.

The injured deputy was taken to Grady Memorial Hospital for treatment. He has since been released and is recovering, officials said.

The GBI is completing its own independent investigation into Collins' death, which will be turned over to the Alcovy Judicial Circuit District Attorney’s Office for review.