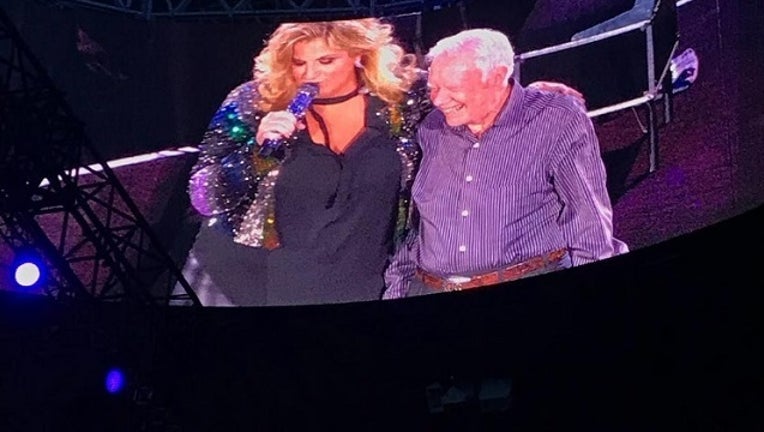 ATLANTA - Garth Brooks had the honor of performing the first concert at Mercedes-Benz Stadium along with his wife, Georgia-native Trisha Yearwood.

Many folks took to social media Thursday night to share their thoughts on the shows. Some voiced concerns over the acoustics in the new stadium early in the show, but most were awestruck over the legendary country music superstar’s performance.

During the concert, Georgia’s own, former President Jimmy Carter stepped onto the stage. The elder statesman and Habitat for Humanity spokesperson got a huge, warm reception from concert-goers with a huge round of cheers and applause.

President Carter, reportedly a country music fan, took the stage alongside Yearwood. The 93-year-old humanitarian read a proclamation to Yearwood for her many years supporting Habitat for Humanity.

Yearwood then led into Georgia’s official state song “Georgia on My Mind.”

This is not the first time the former president has graced the stage beside a big name in country music in Atlanta. In 2016, Carter, his wife Rosalynn hung out with the legendary Willie Nelson and Kris Kristofferson at Chastain Park and even got to sing “Amazing Grace” with them.