Flu blamed for deaths of two people in Georgia county

Officials say the flu is responsible for the deaths of two people, including a teen, in Paulding County.

PAULDING COUNTY, Ga. - The Paulding County Coroner is investigating two deaths within the same week from the flu. A 17-year-old girl and a 29-year-old father passed away at a Paulding County hospital after experiencing flu-like symptoms for several days.

They're very devastated about all of this," said Paulding County Coroner Lindsey Eberhart-Fuller. "It's been heartbreaking and sudden and not something they'd ever thought they'd be dealing with,"

A 17-year-old girl and a 29-year-old man were rushed to Wellstar Paulding County Hospital with flu like symptoms. The teen passed away Tuesday...And within 24 hours, the man passed too.

"Influenza is serious," said Eberhart-Fuller. "You can't be passive about it,. You can't act like it's the common cold."

Their sudden deaths, sparking worry and fear through the community. Eberhart-fuller said she saw so many rumors swirling on Facebook, so she posted the following to set the record straight in regards to the flu outbreak in Paulding County. 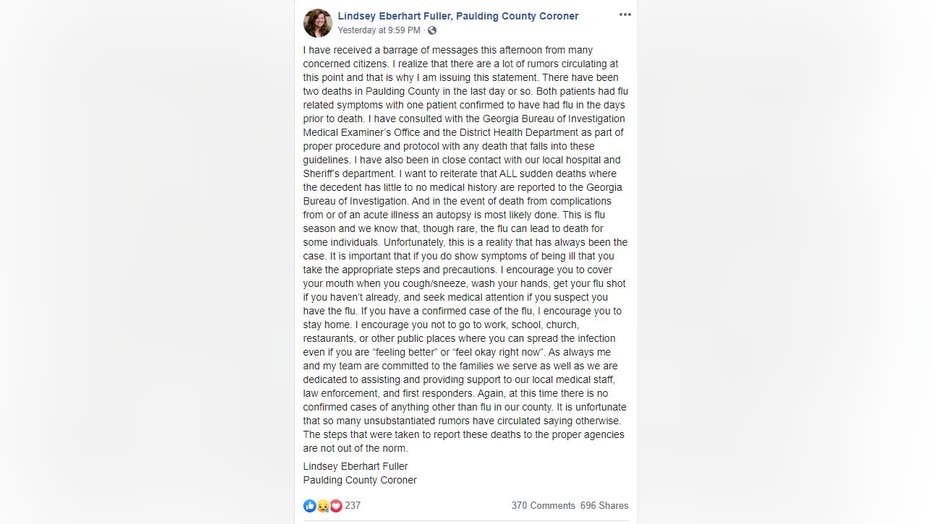 "I could just sense the panic and fear running through the community, and I wanted to put everyone's minds at ease, that it's flu season," Said Eberhart-Fuller.

The coroner said these deaths are worrisome, especially in the midst of a flu season that's already taken more than a dozen lives across the state. She hopes people will remember that even with the flu shot, you still can get sick.

"The flu can take a nasty face to anybody, and it's different for everybody," she said. "That's one of the things that makes it so scary," said Eberhart-Fuller.

Eberhart said the families of the teen and the man who died asked for privacy, but they wanted the community to hear one thing: "We just want people to know that the flu is serious, and you need to be on top of those symptoms early," said Eberhart-Fuller.

The CDC is classifying Georgia as one of several states with a widespread flu outbreak. In the latest flu report from the Georgia Department of Public Health, six deaths from the flu were reported during the last week of 2019, that's compared to 0 deaths during the same week of 2018. In total, 15 people across the state have died this flu season--in comparison to just four, this time last year.