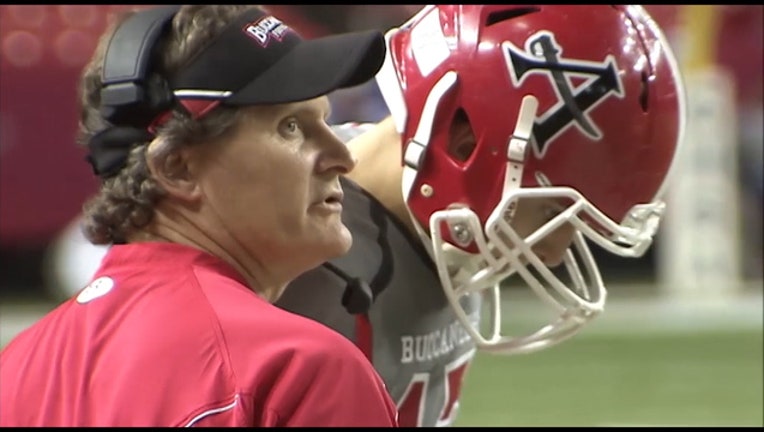 ACWORTH, Ga. - An email sent to Cobb County alleged the head coach of a state championship football program was warned years ago he had two ineligible players, but instead told the person complaining to "drop it."

The allegations came in the wake of a FOX 5 I-Team investigation that found the families of those two star players living in Paulding County, yet still sending their sons to Allatoona High School in Cobb.

Except for rare situations, Cobb County rules forbid someone from living in one county but attending Cobb County schools. Similar to other school districts across Georgia, the rule was designed to prevent families from taking advantage of a school or sports program without having to pay taxes or lay down roots in the community. It was also supposed to guarantee an even playing field for all schools.

In March, the FOX 5 I-Team raised questions about the eligibility of two of Allatoona's best players, senior tailback Russell Halimon who was hurt in the first round of the playoffs last year, and senior defensive back Juanyea Tarver, one of three to hoist the state championship trophy when Allatoona beat Glynn Academy to win the AAAAA title.

We found both seniors in Paulding County, not Cobb, during five random checks of Paulding addresses. Even though we also saw them leaving those Paulding homes in the morning, Tarver's father Corey denied it, insisting his son lived with his grandmother in Cobb County.

"He stays over at my mother's house," maintained Tarver.

"He stays there every night?"

LaShawn Halimon told us they lived in a specific Cobb County home up until last year. But neighbors told us that's not true, and we noticed the Halimons drove a car with a Paulding County license plate from April 2015.

"We're in and out and we've been here for four years," she explained while standing in her Paulding driveway.

If a Georgia high school admits a student to the 9th grade, any future allegations of address fraud are the responsibility of the school district to investigate, not the more powerful Georgia High School Association. Critics claim that policy gives parents and coaches a bigger incentive to do whatever's necessary to get the kid into the 9th grade.

In response to our original investigation, the former director for the middle school program at Fred Larson sent an email to Cobb County's athletic director, which the FOX 5 I-Team obtained through the Open Records Law.

Dated March 24, 2016, Larson wrote he warned Allatoona's top athletic officials about those Paulding addresses years ago when the two players were actually in middle school. Cobb County redacted the names of the two players, but it's clear Larson is talking about our investigation.

"The bottom line with (the second kid) is that their family never lived in the Allatoona district and like the (first) kid, live in the North Paulding district."

Larson, who declined to comment to the FOX 5 I-Team, also wrote this about Allatoona head football coach Gary Varner:

And the former middle school coach ended with this: "I don't blame the players, I blame the parents, (athletic director) Benji Morrell, and Gary Varner for covering up the lies for seven years. Make no mistake about it, they knew."

Coach Varner was named Georgia AAAAA Coach of the Year in 2015. He did not return our call for comment. Neither did anyone in the Cobb County school administration. But parents of Glynn Academy, the school Allatoona beat in the state championship, are livid.

"If they knew before they entered the 9th grade, they should be penalized," argued Craig Entwistle, whose son served as one of the kickers for Glynn Academy. "The title should be vacated. They're cheaters. They cheated. It's that simple."

Entwistle said none of the parents wants the championship trophy for Glynn Academy. He said they only want to make sure eligibility fraud is taken seriously. The parents encouraged a group of state lawmakers to meet next week to see what can be done about a system that relies on a school district to regulate itself.

"If nobody takes a stand, this will never stop," he said through a Skype interview from his St. Simons Island home. "This will continue every day, the next year, the year after the next year. Somebody's got to take a stand and say you know, we are going to take eligibility seriously and we want to have a level playing field."

Allatoona beat Glynn Academy 10-6 for the championship. Juanyea Tarver finished the night tied for the team lead in tackles with eight.

"If GHSA does nothing about it, I think the trophy... I think a GHSA title doesn't mean a whole lot," Entwistle insisted.

In response to the FOX 5 I-Team, GHSA executive director Gary Phillips emailed "we have no further comments at this time."