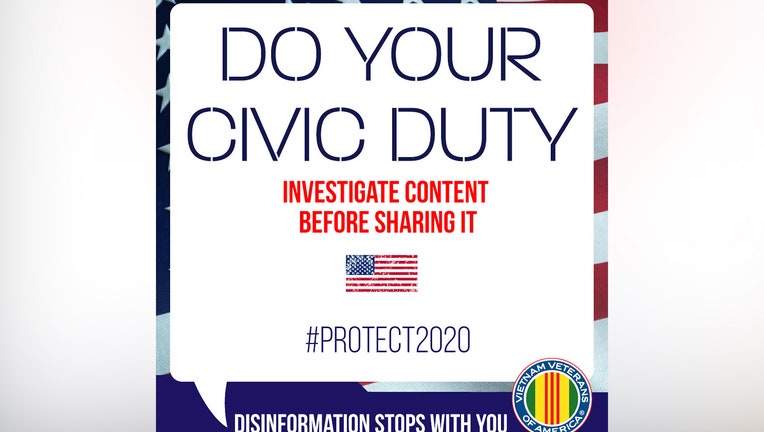 Shareable graphic from VVA to protect against information ahead of 2020 election.

LOS ANGELES - The Cybersecurity and Infrastructure Security Agency of the U.S. Department of Homeland Security (CISA) and Vietnam Veterans of America (VVA) are teaming up to help veterans combat the spread of misinformation ahead of the 2020 election.

Vietnam Veterans of America is a nonprofit organization whose “goals are to promote and support the full range of issues important to Vietnam veterans, to create a new identity for this generation of veterans, and to change public perception of Vietnam veterans,” according to their website.

The VVA created a report specifically discussing how veterans are targets of foreign entities to spread misinformation.

“American veterans and the social-media followers of several congressionally chartered veterans service organizations were specifically targeted by the Russian Internet Research Agency with at least 113 ads during and after the 2016 election,” the report read.

The report highlighted that foreign entities were specifically targeting veterans through the use of fake social media accounts such as one titled “Vets for Trump,” which was created and controlled by admins from Macedonia and the United Kingdom.

RELATED: International monitoring group has eyes on 2020 election in US

From April 2019 to August 2019, the Facebook page “amassed over 131,000 followers. This page posts explicitly pro-Trump and anti-Democratic-candidate messages and memes. The page also posts pro-Russia/ Putin, pro-Assange/WikiLeaks, as well as anti-Robert-Mueller and anti-FBI content,” the report stated.

The Facebook page was also focused on spreading “hatred by using xenophobic and Islamophobic propaganda against the Democratic women of color who are freshmen in Congress.”

In a bid to thwart similar efforts ahead of the 2020 election, as well as future elections, tools created for the #Protect2020 initiative will help veterans amplify warnings about sharing misinformation on social media and to help educate others about how to spot harmful content.

Downloadable and shareable informational graphics were made available so that service members can easily hold themselves and friends and family accountable by reminding them of several things before sharing out information that has yet to be vetted. 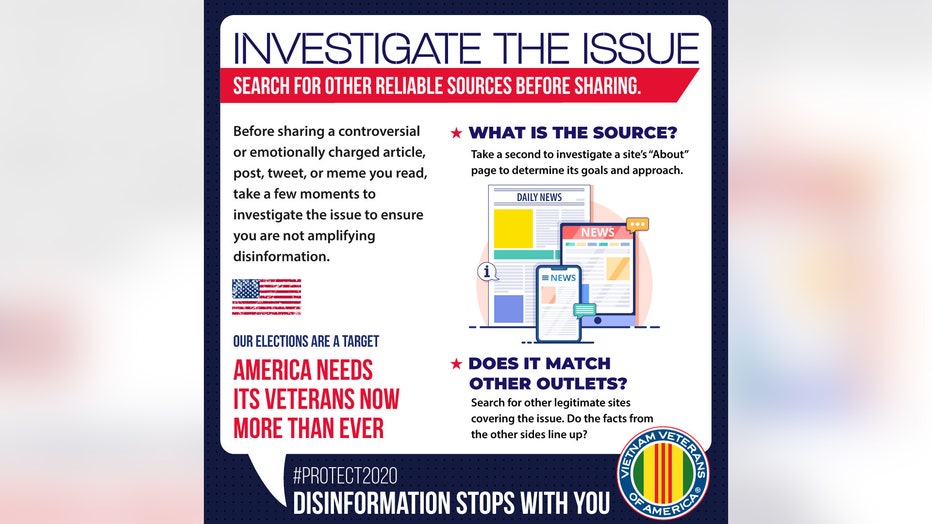 Some reminders for veterans include questions that should be addressed before sharing out a story such as if the author is credible and what the source of their information is.

“Foreign adversaries continue to seek ways to divide Americans and spread disinformation in an effort to undermine faith in our democracy,” said Matt Masterson, CISA senior cybersecurity advisor. “The strongest defense against disinformation is an informed public, and by working with VVA, we will be able to reach more Americans and arm them with what they need to spot and stop disinformation. Our veterans have always stepped up when called upon, and once again, they can play a crucial role in defending our democratic process from foreign interference.”