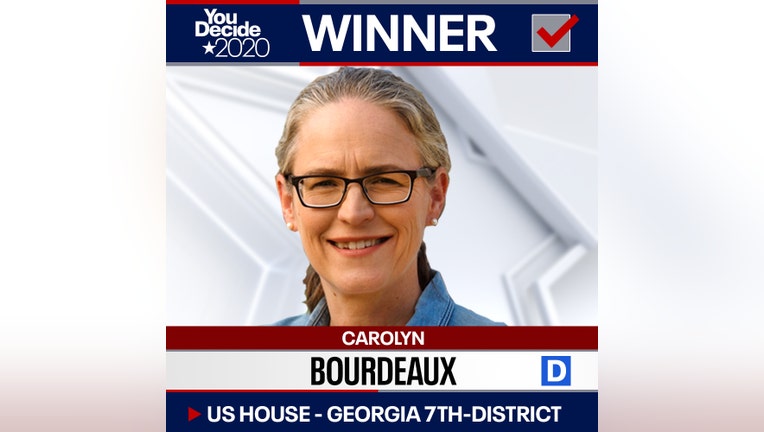 Georgia’s 7th Congressional District became hotly contested following the announcement Rep. Bob Woodall would be stepping down. The Democrats were hoping the changing demographic in Gwinnett and Forsyth counties would help the district turn blue.

It’s a fast-changing district, with the share of white non-Hispanic residents falling to less than 45%. The remainder is split between Black, Asian, Hispanic and mixed-race residents, according to Census Bureau estimates. That, combined with Republican weaknesses among college-educated women who used to be reliable GOP voters, means the territory has been transformed.

This is the second time college professor Carolyn Bourdeaux vied for the seat. In 2018, she lost to Woodall by a little more than 400 votes. It was the closest a Democrat has come to winning the seat in more than two decades.

Bourdeaux, a public policy professor at Georgia State University who was a former budget director for the Georgia state Senate, ran on expanded access to health care. She wants to reform the current Affordable Care Act and provide a publicly sponsored insurance option, saying during one of the debate that too many people paid “extortionary” rates for health insurance.

The Republicans choose a strong contender for her in physician and former Marine Rich McCormick. He was seen as the viable and knowledgeable choice having working in the health care industry. McCormick favors a Republican health care solution of less regulation and encouraging people to shop by price. He said he deplores the consolidation of hospital ownership and has pushed for an end to “surprise” billing, where insured consumers get unforeseen bills, the issue McCormick said got him into politics.

RELATED: Joe Biden takes the lead in Georgia as votes continue to be counted

The campaign’s tone change, in a big part, to the coronavirus pandemic. Bourdeaux’s campaign linked McCormick to the Trump administration’s handling of COVID-19 and used statements McCormick had made as well as multiple appearances he made without a mask against him to try to discredit him as a physician.

On the defensive, McCormick was forced to deny he ignored the severity of the virus and talked up his being on the frontline in the battle against the virus having continued to work at area emergency rooms during his campaign.

McCormick has maintained that he favors Georgia’s current strategy that offers few restrictions and open businesses. He also has opposed further unemployment assistance saying aid shouldn’t “encourage people to stay unemployed when there’s ‘help wanted’ signs all over the place.”

Similarly, McCormick touted lower taxes and regulation as the best way to spur the economy.

On immigration, a big issue in the district, Bourdeaux opposed the policy of local police agencies partnering with the federal government to arrest people in the country without legal permission, saying it breeds fear of police in immigrant communities making the whole district less safe. McCormick disagrees, but does approve of a path to citizenship for immigrants who “follow the law.”

Bourdeaux had the spending advantage in the campaign outraising and outspending McCormick outright by nearly a half million dollars. There was also much interest by the Democratic Congressional Campaign Committee in flipping the seat similar to how Rep. Lucy McBath was able to do Georgia’s 6th Congressional District two years prior.

McCormick drew support from the Super PAC Club for Growth Action due to his free-market beliefs, but it did not make up for the money being funneled into the race by the Democrats.