ATLANTA - The DEA delivered a message Tuesday to gang members involved in a shootout with their undercover agents: We will find you and bring you to justice.

The last of five shooting suspects involved in a shootout at the Hollywood Apartments in northwest Atlanta on October 8 are in custody.

Demetrius Lewis had his first court appearance in front of a federal Judge at 2 p.m. on Tuesday. Special Agent Robert Murphy spoke to a room full of people about these arrests and the investigation. A poster set up in the meeting showed photos of the five men in custody with many silhouettes below.

"We have taken out these five but I can assure you these won't be the last five," said Special Agent Murphy. "We've had a lot of motivated individuals providing us information or cooperating with us. And we will crush, dismantle and arrest anyone affiliated with this local gang."

The Georgia Bureau of Investigation is still looking into the DEA agent’s actions that day. Of the actual incident, the DEA told FOX 5 on Oct. 8: "An undercover agent was approached by several armed individuals who attempted to rob him. At that point, other DEA agents who were on scene attempted to intervene in the robbery, and shots were exchanged between the assailants and our agents."

One person was shot in the leg and is expected to recover. He was transported to an area hospital for treatment.

Federal officials said no agents were hurt in the shooting. 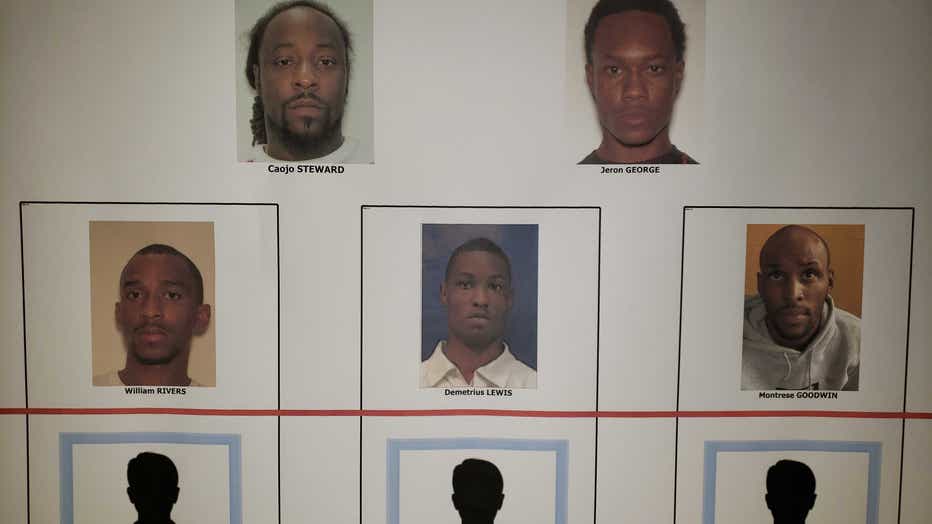 Lewis was scheduled for his detention hearing in federal court on Friday.

RELATED: GBI: 1 injured, 2 in custody after shootout with DEA in northwest Atlanta