The masks were available to everyone who attended the Northern California wedding of Katie and Curtis Ferland.

KENWOOD, Calif. - An Illinois couple who got married in Northern California's Sonoma County on Saturday — with a massive wildfire raging nearby — posed for a dramatic wedding portrait wearing masks.

Wedding photographer Karna Roa captured the photo of the bride and groom, who got married at the Chateau St. Jean Winery in Kenwood, Calif., on Saturday, as the Kincade Fire burned just miles away.

The wildfire in Northern California’s wine country forced nearly 180,000 people to evacuate over the weekend as historic winds pushed the state’s largest utility to cut electricity for millions of people to try to prevent more fires. 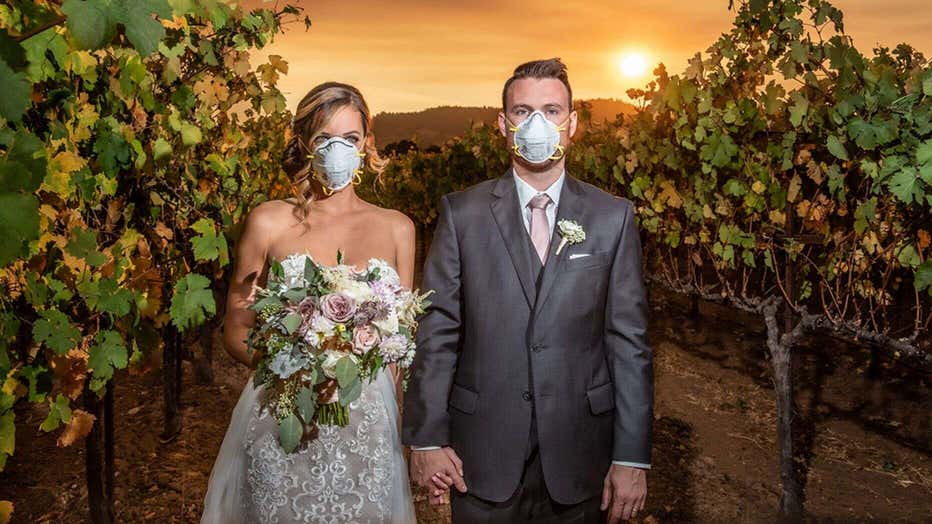 An Illinois couple got married in Northern California's famous Sonoma County on Saturday as a massive wildfire raged nearby, posing for a dramatic wedding photo as they wore masks, the photographer told Fox News. (Karna Roa/KMR Photography)

Roa told Fox News she did have some reservations showing up to the Chateau St. Jean vineyard in Sonoma County to photograph the wedding on Saturday, given the situation.

“The whole area, of course, was super smoky,” she said. “I would love to say this is the first time it has happened, but this is the third year in a row in October that wine country has experienced this.”

She said the couple, Katie and Curtis Ferland, from Chicago, are currently on their honeymoon, and not immediately available for an interview.

Curtis Ferland told WLS-TV in an earlier interview that he thought the wedding would need to be canceled after learning of the widespread wildfires. "The first thing we see on TV when we turn it on is flames everywhere," he said.

After arriving on the West Coast for their wedding, Katie and Curtis reportedly had to move to a hotel when their Airbnb rental lost power. The two were also forced to move the location of their rehearsal dinner because of the fire. WLS-TV reported that most of their vendors and staff were forced to evacuate on Saturday, but the ceremony still took place.

Sara Sugrue, the wedding planner, had to redesign the entire event the night before the nuptials, according to the news outlet.

"We actually worked off a skeleton crew to make this happen," she said.

Roa told Fox News it was the wedding planner who suggested the now-viral photo of Katie and Curtis in their masks.

“Because of all of the changes in the plans and all of the stress leading up to the wedding, the wedding planner suggested that they do at least one image with the masks on,” Roa told Fox News, adding that the masks were available to everyone who attended the wedding, but the guests were only outside for 20 minutes because of the smoke.

“When the couple put on the masks and it came time for this photo, I immediately thought of the American Gothic painting from 1930 and how that painting represented the normal for America of the time period," Roa said. "All of a sudden this moment represented the new normal for wine country in October.”

After their wedding, early on Sunday morning, the Ferlands and all of their guests were reportedly forced to evacuate.