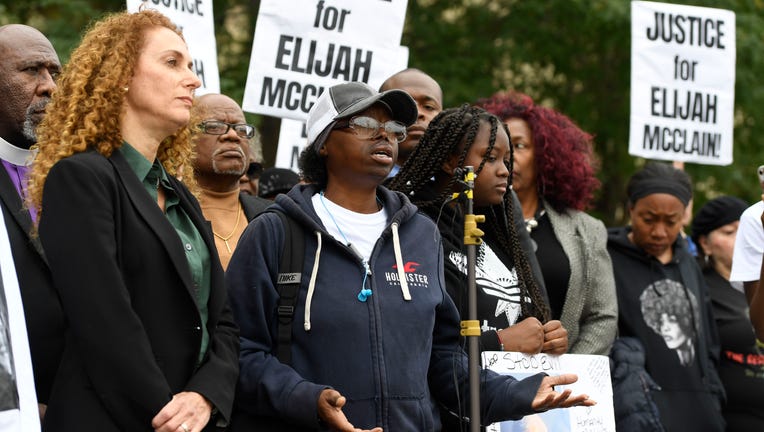 DENVER (AP) - The Colorado governor on Thursday ordered prosecutors to reopen the investigation into the death of Elijah McClain, a 23-year-old Black man put into a chokehold by police who stopped him on the street in suburban Denver last year because he was “being suspicious.”

“Elijah McClain should be alive today, and we owe it to his family to take this step and elevate the pursuit of justice in his name to a statewide concern,” Polis said in a statement.

RELATED: 'We are just going to go out and start slaughtering them': 3 NC police officers fired over racist rants

He said he had spoken with McClain's mother and was moved by her description of her son as a “responsible and curious child ... who could inspire the darkest soul."

Police in Aurora responded to a call about a suspicious person wearing a ski mask and waving his arms as he walked down a street on Aug. 24. Police body-camera video shows an officer getting out of his car, approaching McClain and saying, “Stop right there. Stop. Stop. ... I have a right to stop you because you’re being suspicious.”

Police say McClain refused to stop walking and fought back when officers confronted him and tried to take him into custody.

In the video, the officer turns McClain around and repeats, “Stop tensing up.” As McClain tries to escape the officer’s grip, the officer says, “Relax, or I’m going to have to change this situation.”

As other officers join to restrain McClain, he begs them to let go and says, “You guys started to arrest me, and I was stopping my music to listen.”

One of the officers put him in a chokehold that cuts off blood to the brain, something that has been banned in several places in the wake of Floyd's death May 25 under the knee of a Minneapolis police officer and the global protests that followed.

In the video, McClain tells officers: “Let go of me. I am an introvert. Please respect the boundaries that I am speaking.” Those words have appeared on scores of social media posts demanding justice for McClain.

He was on the ground for 15 minutes as several officers and paramedics stood by. Paramedics gave him 500 milligrams of the sedative ketamine to calm him down, and he suffered cardiac arrest on the way to the hospital. McClain was declared brain dead Aug. 27 and was taken off life support three days later.

A forensic pathologist could not determine what exactly led to his death but said physical exertion during the confrontation likely contributed.

McClain's younger sister, Samara McClain, told The Denver Post shortly after his death that her brother was walking to a corner store to get tea for a cousin and often wore masks when he was outside because he had a blood condition that caused him to get cold easily.

In the video, Elijah McClain sobs as he repeatedly tells officers, “I’m just different.” Samara McClain said her brother was a massage therapist who planned to go to college.

The Police Department put the three officers on leave, but they returned to the force when District Attorney Dave Young said there was insufficient evidence to support charging them.

“Ultimately, while I may share the vast public opinion that Elijah McClain’s death could have been avoided, it is not my role to file criminal charges based on opinion, but rather, on the evidence revealed from the investigation and applicable Colorado law,” Young said shortly before Polis ordered the investigation reopened.

Mari Newman, the McClain family's attorney, said she was pleased with the governor's decision.

“Clearly, Aurora has no intention of taking responsibility for murdering an innocent young man,” she said. “Its entire effort is to defend its brutality at all costs, and to lie to the public it is supposed to serve. It is time for a responsible adult to step in.”

Colorado's attorney general said in a statement that the investigation will be thorough and “worthy of public trust and confidence in the criminal justice system.”