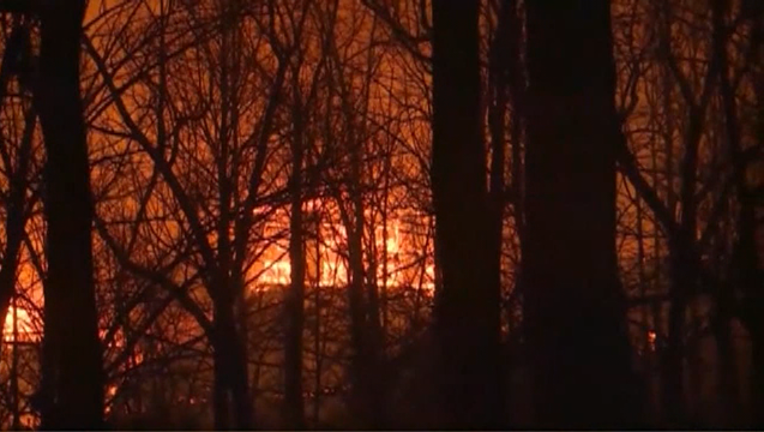 WASHINGTON (AP) - People have triggered five out of six wildfires in the U.S. over the last two decades, tripling the length of the wildfire season and making it start earlier in the East and last longer in the West, a new study finds.

While fire experts have long blamed people more than lightning, the new work details the extent of human-caused ignitions and how they interact with global warming to make matters worse.

Scientists analyzing fire data from 1992 to 2012 found that 84 percent of all U.S. wildfires - but only 44 percent of the total acres burned - were started by people, either by accident or on purpose. And human-caused blazes have more than tripled the length of the wildfire season from 46 days to 154 days, according to a study in Monday's journal Proceedings of the National Academy of Sciences.

"People are moving more and more into natural wild areas and essentially providing ignition for wildfires," said lead author Jennifer Balch, a fire ecologist at the University of Colorado.

Of the more than 1 million human-started fires since 1992, about 29 percent began by trash burning, another 21 percent were arson and 11 percent were from misuse of equipment, Balch said.

Last year's Soberanes fire in California was sparked by an illegal campfire and burned for nearly three months. The blaze surpassed $200 million in firefighting costs, the most expensive in U.S. history.

One out of every five wildfires occurs on the Fourth of July from fireworks, Balch said.

The Southeast is a hot spot for human-triggered wildfires. Kentucky, West Virginia, Tennessee had fire seasons that lasted more than 200 days and 99 percent of the wildfires in those states are caused by people.

The region is home to swaths of forests with trees that don't catch fire easily or naturally so people are the main culprits, said study co-author Adam Mahood of the University of Colorado.

Climate change has lengthened the U.S. fire season by a few weeks, which is dwarfed by what humans do. But the study shows how both human-sparked flames and man-made climate change work together to make America burn more, especially during more frequent dry, hot weather.

"If a campfire grows out of control during a wet, cool period, then it probably isn't going to grow into a large wildfire," said University of Utah fire scientist Philip Dennison, who wasn't part of the study. "Climate change loads the dice toward warmer, drier conditions that make it more likely that a fire will develop from human-caused ignitions."

Follow Seth Borenstein at http://twitter.com/borenbears and his work can be found at http://bigstory.ap.org/content/seth-borenstein