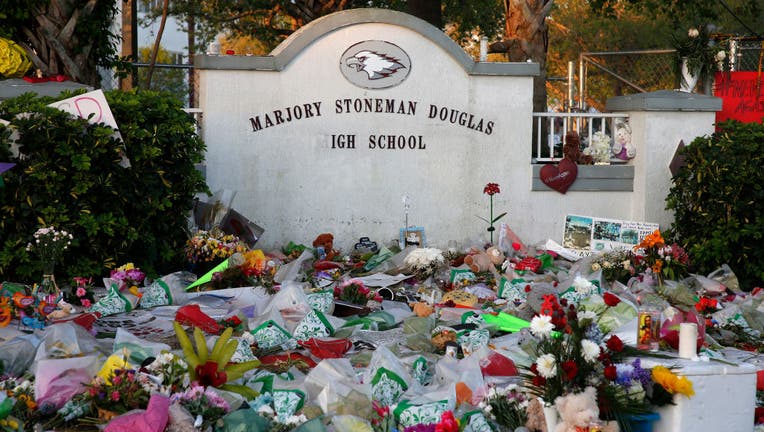 Flowers, candles and mementos sit outside one of the makeshift memorials at Marjory Stoneman Douglas High School in Parkland, Florida on February 27, 2018. (RHONA WISE/AFP via Getty Images)

FORT LAUDERDALE, Fla. - A Florida school district wants the families of students and staff slain in a 2018 high school massacre to turn over their social media posts from that period, saying it needs them as part of its defense against the families’ lawsuits accusing it of negligence.

Attorneys for the Broward County Public Schools will ask a judge Thursday to order the families who are suing to turn over their Facebook, Twitter, and other social media posts from the period after the Feb. 14, 2018, massacre at Marjory Stoneman Douglas High School. The shooting left 14 students and three staff members dead.

The district cited multiple lawsuits in which judges found social media postings were relevant for the defense, including lawsuits against local governments. The families have numerous claims against the district, including that it knew the shooting suspect, a former student at the school, was a threat and did little to protect the school from him.

“Such postings are clearly relevant,” school district attorney Eugene Pettis wrote in a motion demanding the posts, according to the South Florida SunSentine l. “Defendants are entitled to discover whether the plaintiffs have made any comments on social media regarding” the shooting.

READ: Widow of Parkland massacre victim elected to school board

Attorney David Brill, who represents parent Andrew Pollack, told the newspaper the request is intrusive and unnecessary. Pollack’s 18-year-old daughter Meadow died in the shooting and he has become an outspoken critic of the district and its superintendent, Robert Runcie. He has posted much of his criticism on Twitter.

The posts “are irrelevant to the school district’s failure to stop” the shooter, Brill told the paper. “They’re going to find that these parents were heartbroken and angry, which they can learn without subjecting the families to this demand.”

Former student Nikolas Cruz, 22, is charged with 17 counts of first-degree murder in the shooting and faces a possible death sentence if convicted. His trial has been postponed because of the pandemic. Cruz had a long history of emotional and behavioral problems and his social media posts have been presented as evidence. They include threats and Instagram posts of him with guns.

In addition to the school district, Cruz, the Broward County Sheriff’s Office and its former deputy, Scot Peterson, who was stationed at the school, and others are facing multiple lawsuits.