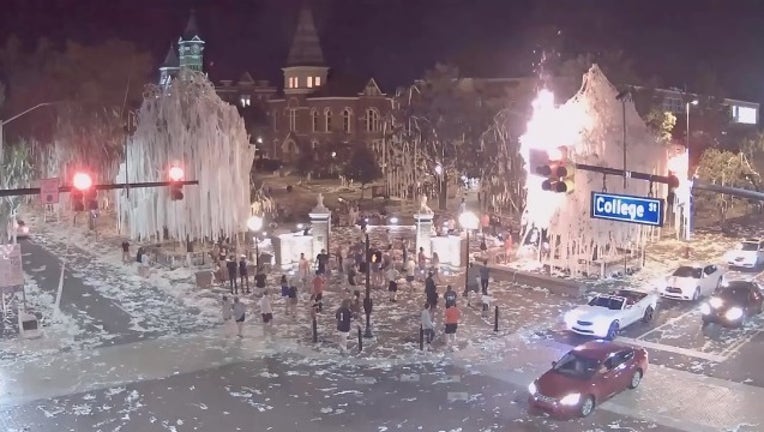 OPELIKA, Ala. (AP) — A German man has reached a deal with Alabama prosecutors and wants to plead guilty to setting fire to a landmark oak tree at Auburn University, a court document shows.

An attorney for Jochen Wiest, 29, filed a document in Lee County Circuit Court on Wednesday saying her client has reached an agreement with authorities.

The lawyer, Margaret Brown, is asking a judge to set a hearing for Wiest to plead guilty.

The judge didn't immediately set a hearing date, but he refused to return Wiest's passport so he could return home to Germany. Wiest wanted to go home for the holidays and for his daughter's second birthday on Dec. 31.

Wiest was charged with criminal mischief, desecrating a venerable object and public intoxication, and court documents indicate he could plead guilty to all three charges.

The oaks at Toomer's Corner are known as a gathering spot for Auburn fans who cover the trees with toilet paper after a football victory.

Wiest is accused of setting fire to toilet paper that covered one of the oaks after the Auburn-Louisiana State University football game this season. Video captured the spreading flames, and an Auburn student was credited with helping detain the man for police.

Officials have said the burned tree will likely die. It was a replacement for an oak tree that died after being poisoned by a University of Alabama fan after Auburn beat Alabama in 2010 on its way to the national championship.

Harvey Updyke spent six months in jail after pleading guilty to the poisoning and was ordered to make restitution payments of more than $800,000.

The motive for the tree fire isn't clear. Police have said Wiest was wearing an Auburn baseball cap when he was arrested.