GWINNETT COUNTY, Ga. - In the hustle and bustle of one Gwinnett County vintage market sits a vendor whose unassuming booth may fall below your eye line, but its purpose is one you won't want to miss.

For the past several months, Henry Lawrence, 5, has been traveling to different markets in Georgia and Alabama, selling essentially all things buttons.

He shows off a colorful array of buttons, necklaces, earrings and Christmas tree ornaments.

His hard work in creating and selling the items is fueled by a clear goal that he is sure to share with each shopper – “to sponsor [kids] for Christmas.” 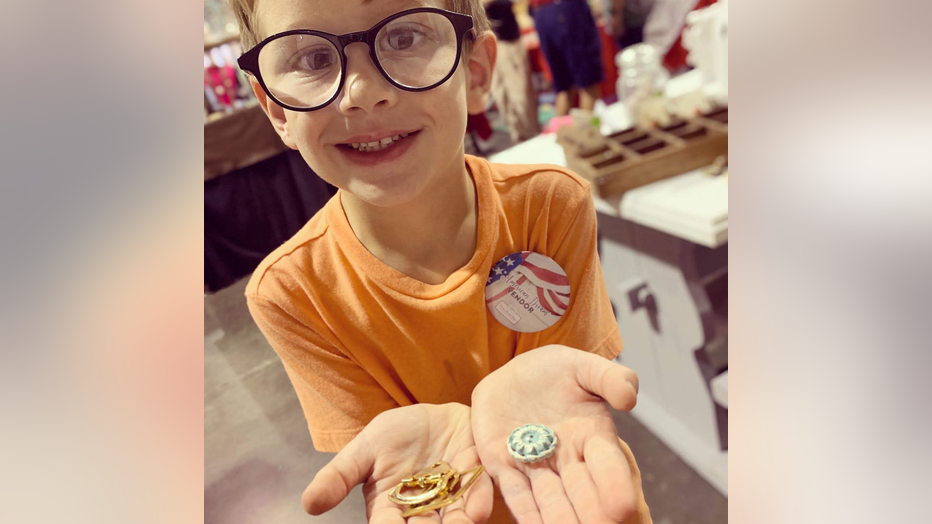 "He gets really spoiled at the holidays, so he thought this would be a fun opportunity to spoil someone else," said mother Laura Lawrence.

Henry teamed up with Helping Hands of Pauling County to sponsor less fortunate kids around Christmas...and six markets later, he is more than halfway to his fundraising goal of $500 to be split among five kids.

"We are blessed to have 5-year-old residents of Paulding County such as Henry who already had an empathetic heart to serve and give to kids who probably would not have a Christmas gift if it were not for him!" said Reva Burks with Helping Hands of Pauling County.

Such generosity makes for a proud mama.

"He's just so lucky, he has so many family and friends, so we just want to teach him that," said Lawrence, tearing up. "We're very proud, sorry I'm a mess, we're very proud."

Henry's Button Project has earned quite the reputation among the vintage market community. Linda Dill, co-founder of Vintage Market Days of Greater Atlanta, said it melts her heart to see a 5-year-old have so much determination -- all for good. She told FOX 5 that kind of thoughtfulness is always welcome at her market.

"They're exactly the type of people we love to have at our market, and there are so many vendors like that," Dill said.

You can learn more about Henry's story and donating to his cause here.