Firefighters say the two children and their mother were trapped inside of the Troup County mobile home.

LAGRANGE, Ga. - Two children were killed in a mobile home fire Wednesday morning in LaGrange. The trailer, which was built in the 1970s, was fully engulfed with flames when police and firefighters arrived.

The fire was reported around 4:08 a.m. on Cherry Valley Drive. When firefighters arrived, they say Lynett Chester, 38, and her two children, William, 8, and Desmond, 12, were trapped inside by the flames.

"We broke down the door to the front of the house to get to the kids. Lynett went in and after that I couldn't see her," said Jason Holmes, recounting the tragic fire. "I stayed outside, running to the neighbors' houses, banging on doors, yelling and screaming." 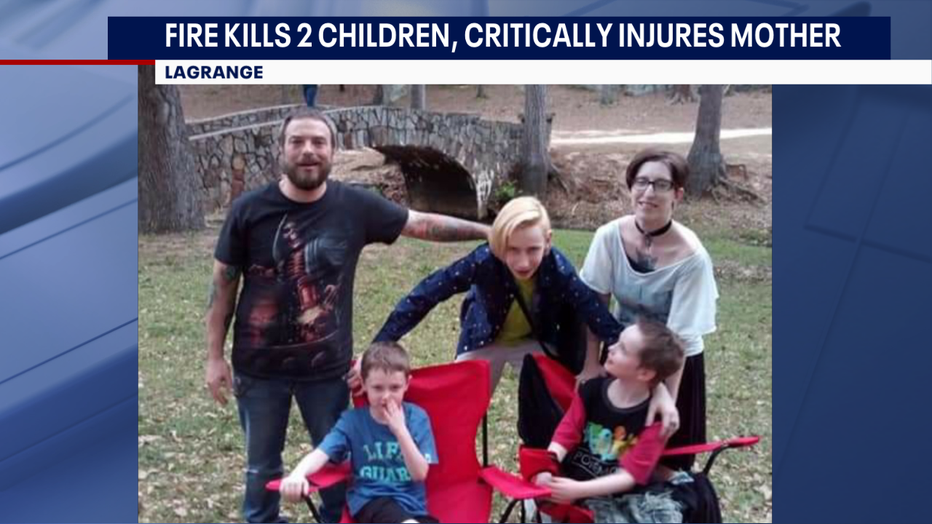 FOX 5's Aungelique Proctor spoke with Jason Holmes, the woman's husband, who said his wife suffered burns to over 70% of her body. The two children did not make it.

Holmes managed to escape without injury. He said his wife was taken to the hospital where she is on life support. She was listed in critical condition at Grady Memorial Hospital as of early Wednesday evening.

"They had to pull Lynert and the kids out. I couldn't and even see them. They wouldn't let me see them," Holmes said.

Fire officials said they found the body of one of the children in the kitchen and the other in the back bedroom. State fire investigators have ruled the fire to be accidental.

"I just don't even know what my next step is going to be. I am at a loss," Holmes said.

“Any loss of life due to a Georgia fire is hard, but the loss of two children is even harder,” said Fire and Insurance Commissioner King. “As a husband and father, I am keeping this family and their loved ones in my prayers throughout the coming days. I know my staff will be doing the same.”

The small community of about 30,000 is mourning the family's loss as well.

"This is how we do it in Lagrange. We one hurts, we all hurt. We are praying for this family," said city spokesperson Katie Van Schoor.

State investigators are working with local officials to determine the source of the fire.

“LaGrange officials showed extraordinary bravery and resolve by responding to this devastating fire,” King continued. “Today marks National First Responders Day, and this incident serves as a reminder of the emotional toll a day at work can have on our police, fire, and EMT professionals.”

Commissioner King said the passing of Desmond and William mark the 67th and 68th fire deaths in the state since the start of the year.

A GoFundMe has been set up for the family.