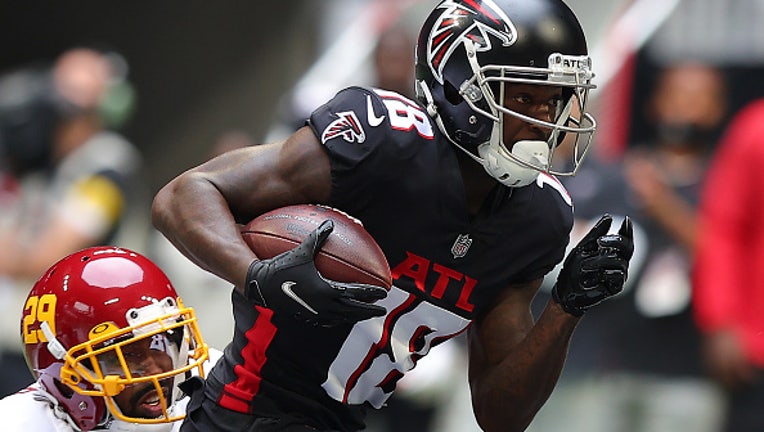 ATLANTA, GEORGIA - OCTOBER 03: Calvin Ridley #18 of the Atlanta Falcons runs with the ball after the catch against Kendall Fuller #29 of the Washington Football Team in the first quarter at Mercedes-Benz Stadium on October 03, 2021 in Atlanta, Georgi

WARE, England (AP) - Atlanta Falcons rookie Kyle Pitts is looking for his first touchdown, and the New York Jets want to keep it that way.

Pitts could play a key role for Matt Ryan and the Falcons after the team announced that leading receiver Calvin Ridley will not play in Sunday’s game in London for personal reasons.

"I would think that he’s going to get a lot of touches," Jets linebacker C.J. Mosley said at a press conference on Friday at the team hotel outside London.

Pitts, a dynamic tight end who has 15 catches for 189 yards, is "pretty much a receiver," Mosley said, citing the versatility of the No. 4 overall pick in the NFL draft.

"He’s running all the routes a receiver does," Mosley said. "He has the same speed, he has great hands."

The Falcons also won’t have receiver Russell Gage, who remains out with an ankle injury. Both teams are 1-3.

After Ridley was absent for Thursday’s practice, the Falcons announced he would not accompany the team to London "due to a personal matter."

At the team hotel outside London on Friday, Falcons coach Arthur Smith told Fox 5 Atlanta that Ridley’s absence is due to "a personal matter. We’ll keep it personal for him. But nothing to add there. We put out the statement. Obviously, we support Calvin. We’ll see what happens when he comes back."

The team statement on Thursday said: "We are in support of Calvin during this time and will respect his privacy on the matter."

Ridley leads Atlanta with 27 catches for 255 yards. He has one touchdown reception.

Ridley had seven catches for 80 yards — with two drops — in last weekend’s 34-30 loss to Washington. On Monday, Smith described Ridley’s performance as "up and down."

Jets coach Robert Saleh said their defensive game plan was already in place before the announcement on Ridley, so it won’t change much.

"As far as calling the game, that will be stuff that you talk about over the next couple of days," Saleh said Friday.

"Ridley is a heck of a football player, but at the same time they’ve still got a lot of weapons with Cordarrelle Patterson — he’s rejuvenated," Saleh continued. "Matt Ryan can get the ball to anyone. Their draft pick Kyle Pitts is pretty fricking good."

Saleh said Pitts is "every bit" deserving of his draft spot.

"He’s going to be a major problem in years to come," he said. "He’s a rookie too, so he’s learning the speed of the game and everything, but you see it on tape and the flashes that he has — he’s going to be a problem."

Patterson, a running back who often lines up as a receiver, caught three touchdown passes against Washington.

"I mean this guy, like I don’t even know what to say he is," Jets defensive coordinator Jeff Ulbrich said earlier in the week. "Yeah, he lines up at, probably, running back more than any other position, but still, he’s at tight end at times, he’s at wide receiver at times. They’re definitely finding a lot of interesting, unique, creative ways to utilize his skillset."