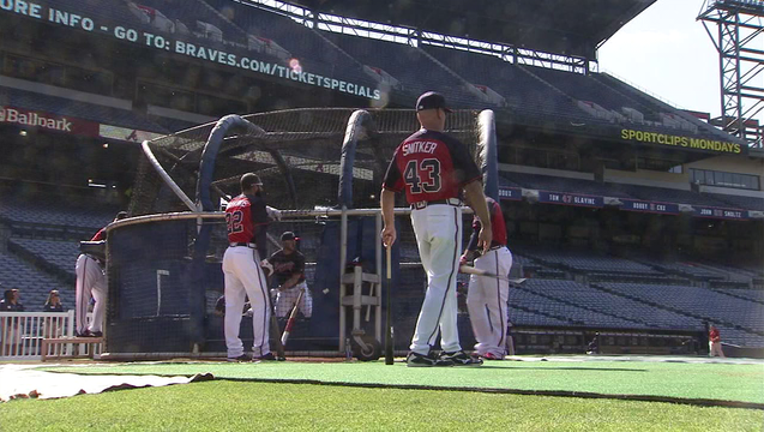 ATLANTA (AP) - Bud Norris is making the most of his second chance in the Braves' rotation.

Freeman had three hits against Colon, helping Atlanta salvage a split of the four-game series. Freeman said his approach against the 43-year-old Colon was the same as he would use against a knuckleball pitcher.

"I know he's going to throw strikes, so I just go up there swinging," Freeman said. "He was a little bit slower and I saw that. You were getting good pitches early in the count, so I went up there aggressive."

Norris (3-7) allowed four hits, struck out eight and walked none.

Norris went 1-4 with an 8.74 ERA in April and then was sent to the bullpen. Since returning to the rotation on June 4, Norris is 2-1 with a 2.15 ERA in five starts. His other win this month came against the Cubs.

"These are great starts against good teams," Braves interim manager Brian Snitker said. "We really need that from him right now. He's filling a valuable spot."

The Mets fell three games back of NL East-leading Washington, which won 3-2 at Milwaukee. They open a series at the Nationals on Monday night.

Brandon Nimmo, one of New York's top prospects, made his major league debut and went 0 for 4 with a game-ending strikeout. The outfielder was recalled from Triple-A Las Vegas on Saturday.

"I'm sure the first-game jitters were huge for him," manager Terry Collins said. "We've got to get him calmed down because he's going to a bigger series here in 24 hours."

Freeman's first-inning homer gave Atlanta a 1-0 lead that held until the eighth. Nick Markakis drove in Ender Inciarte with a single off Antonio Bastardo. Garcia followed with a three-run drive off Logan Verrett for his second homer of the series and No. 5 on the year.

Wilmer Flores' run-scoring single knocked Ogando out of the game. But Arodys Vizcaino struck out Nimmo for his 10th save.

"I think he's going to be fine," Collins said of Nimmo. "I thought his last at-bat was pretty good. Vizcaino is not easy. He's real, real good."

Colon (6-4) allowed one run and six hits in seven innings. He had been 5-0 in his last six starts against the Braves, including a 4-1 win on May 2 in New York.

With two outs in the first, Freeman hit an opposite-field drive to left field. Freeman has 13 of Atlanta's 37 homers —about half of the second-lowest total in the majors. The Giants entered Sunday's game with 62 homers.

Freeman, who hit for the cycle on June 15 against the Reds, doubled to right field in the third and reached on an infield single in the sixth.

Nimmo said Triple-A Las Vegas manager Wally Backman found a devious way of telling him he had been promoted to the majors.

Nimmo said Backman told him the team's flight was full, so he had to take another flight that went through Salt Lake City. Nimmo didn't think that was too odd, because travel in the minor leagues can be challenging.

Nimmo said as he was walking out of the office Backman added "'Brandon, by the way that flight goes to Atlanta.'"

Added Nimmo: "He got me good."

Braves: RHP Mike Foltynewicz (right elbow soreness) may need only one more rehab start before coming off the 15-day DL. Foltynewicz allowed only one hit while pitching five scoreless innings for Triple-A Gwinnett on Saturday.

Mets: RHP Noah Syndergaard (8-2, 2.08 ERA) will try to win his seventh consecutive decision on Monday night. Syndergaard is 2-0 with a 1.33 ERA in four career starts against the Nationals.