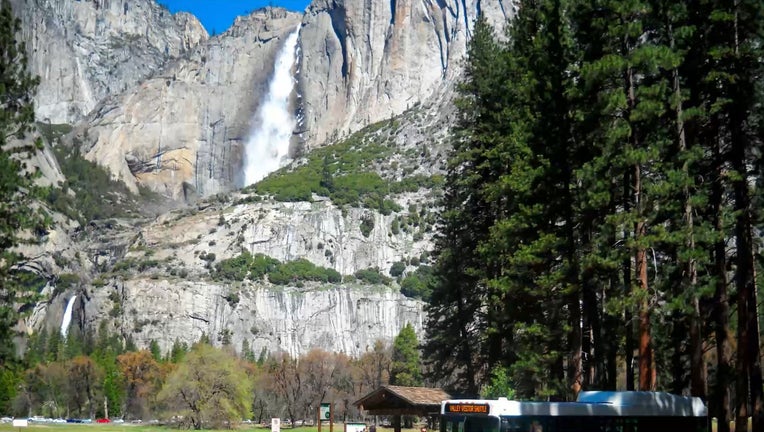 YOSEMITE NATIONAL PARK, Calif. - An estimated 90 shuttle bus drivers and Yosemite National Park transportation workers who were laid off after the park closed to visitors in March are now facing eviction.

The group of Yosemite Hospitality workers were told this week layoffs require them to leave Yosemite by May 21, the Fresno Bee reported Friday.

These are the first reported Yosemite evictions solely because of layoffs caused by the coronavirus pandemic and they come in spite of Gov. Gavin Newsom’s order calling for a statewide moratorium on evictions through May 31, the newspaper reported.

It’s unclear how the order pertains to federal lands, including national parks.

One unidentified Yosemite employee told the newspaper that leaders with Aramark — the Philadelphia-based company that owns Yosemite Hospitality — stressed that the company has the right to evict them because their housing is contingent on employment. Aramark employees in Yosemite pay around $100 a month to live in shared employee housing.

Among the evicted are people without close family or any nearby, including former foster youth and some elderly, longtime Yosemite workers.

Aramark spokesman David Freireich said the company is not planning to evict those employees who are having trouble finding new housing.

"We will continue to work with and assist them on a case-by-case basis” he said.

The park, which had about 4.6 million visitors in 2019, has not announced how long its buses will sit idle, but employees said they were told they won’t run again until January 2021. Aramark employs approximately 1,200 Yosemite Hospitality workers.

“These are unprecedented times that, regrettably, will require incredibly difficult decisions and we are committed to working with and assisting associates affected by them,” Freireich said.

In Sequoia and Kings Canyon National Parks to the south, employees of its concessionaire, Delaware North, were made to leave those parks at the end of March.