"A mob of extremists and terrorists launched a violent and deadly assault on the people’s House," Biden said during the signing ceremony in the White House Rose Garden. "It was insurrection. It was riot and mayhem. It was radical and chaotic. And, it was unconstitutional. Maybe most importantly, It was fundamentally un-American."

The bill, which was passed unanimously by the Senate on Tuesday, will place the medals in four locations: Capitol Police headquarters, the Metropolitan Police Department, the U.S. Capitol and the Smithsonian Institution.

"Our democracy did survive. It did. Truth defeated lies. We did overcome. That’s because of the women and men of the U.S. Capitol Police, the Washington D.C. Metropolitan Police Department and other law enforcement officers we honor today," Biden said. 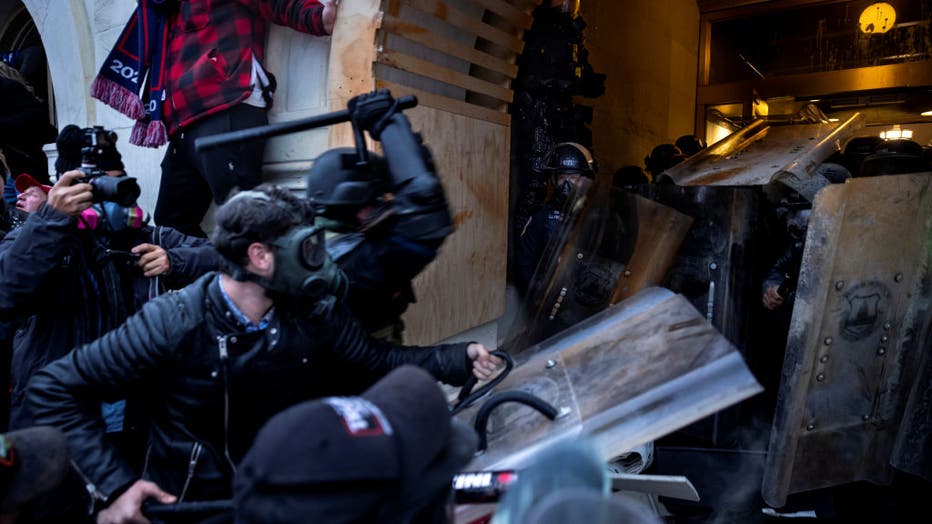 Trump supporters clash with police as people try to storm the U.S. Capitol on January 6, 2021, in Washington, D.C. (Photo by Brent Stirton/Getty Images)

"Today, I’m going to sign into law the bill you sent to me, that awards the Congressional Gold Medal to the U.S. Capitol Police, the Washington D.C. Metropolitan Police Department and other law enforcement for their service and defense of our democracy on January the 6th," Biden continued.

Hundreds of officers from two police departments responded to the attack, many of whom were beaten and injured as the violent mob overwhelmed them, broke through windows and doors, and interrupted the certification of Biden’s presidential victory.

The police and National Guard troops eventually cleared the building and the count resumed.

"In securing our Capitol, they secured our democracy," Vice President Kamala Harris said in remarks.

Some of the officers, including four who testified at a House hearing last week, have spoken about the lasting mental and physical scars.

"This is how I'm going to die, defending this entrance," Capitol Police Officer Aquilino Gonell recalled thinking during his testimony.

Gonnell, an Iraq veteran, wiped away tears as he described hearing other officers screaming in agony and pain just a few feet away from him.

Metropolitan Police Officer Michael Fanone, who helped to defend the Capitol from a mob of then-President Donald Trump supporters, described being beaten by rioters who shocked him with a stun gun in testimony on July 27, 2021.

"On January 6, for the first time, I was more afraid to work at the U.S. Capitol than during my entire deployment in Iraq," Gonnell testified.

The Senate passed the legislation by voice vote, with no Republican objections. The House passed the bill in June, with 21 Republicans who have downplayed the insurrection in Trump’s defense voting against it.

RELATED: Some Capitol riot suspects are trying to use journalism as a defense

Senate Rules Committee Chairwoman Amy Klobuchar, D-Minn., said the medals are "a recognition that will be on display for people to understand and remember what these officers did." When bringing the bill up for a vote on Tuesday, she said that children of the future will be able to walk by and see the medals in the Smithsonian, and their parents will tell them: "This happened, this attack happened."

Trump, along with many Republicans still loyal to him, has tried to downplay the riot, even as law enforcement officers who responded that day have detailed the violence and made clear the toll it has taken on them. The four officers who testified in the emotional hearing detailed near-death experiences as the insurrectionists beat and crushed them on their way into the building.

Timeline of the riot at the US Capitol on Jan. 6

What started as a congressional and democratic exercise in the peaceful transfer of power, devolved into death, destruction and chaos.

Metropolitan Police Officer Daniel Hodges described foaming at the mouth, bleeding and screaming as the rioters tried to gouge out his eye and crush him between two heavy doors. Capitol Police Officer Harry Dunn said a large group of people shouted the N-word at him as he was trying to keep them from breaching the House chamber.

Metropolitan Police Officer Michael Fanone testified of being beaten by rioters who shocked him with a stun gun, "all while being called a traitor to my country." Doctors later told him he'd had a heart attack.

"I was at risk of being stripped of, and killed with, my own firearm as I heard chants of 'kill him with his own gun," Fanone testified. "I can still hear those words today."

At least nine people who were at the Capitol that day died during and after the rioting, including a woman who was shot and killed by police as she tried to break into the House chamber and three other Trump supporters who suffered medical emergencies. Two police officers died by suicide in the days that immediately followed, and a third officer, Capitol Police Officer Brian Sicknick, collapsed and died after engaging with the protesters. A medical examiner determined he died of natural causes.

Last week, the Metropolitan Police announced that two more of their officers who had responded to the insurrection had died by suicide. Officer Kyle DeFreytag was found dead on July 10 and Officer Gunther Hashida was found dead in his home Thursday. The circumstances that lead to their deaths are unknown.

"We are grieving as a department," the police said in a statement.

In a ceremony to send the bill to the president, House Speaker Nancy Pelosi said Wednesday that Jan. 6 was "a moment, a day of extraordinary tragedy for our country" and praised the Capitol Police for their bravery and patriotism.

"I’m so sad that it took a tragedy of this nature for the recognition to be given to them," Pelosi said.

This story was reported from Cincinnati and Los Angeles. The Associated Press contributed.