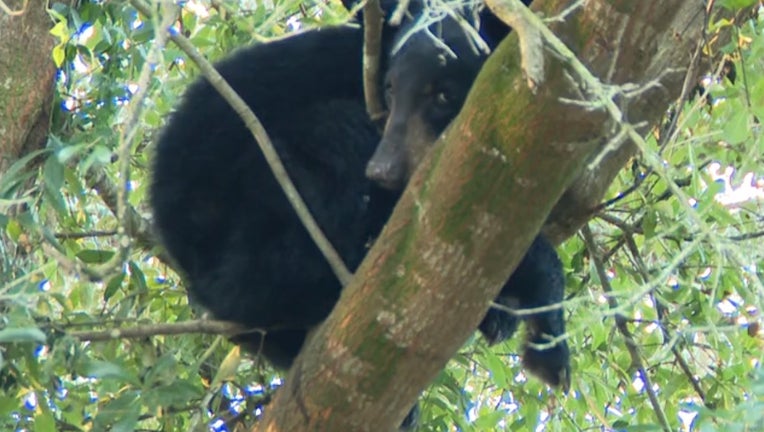 APOPKA, Fla. - Officials at a wildlife refuge in Apopka have an action plan to encourage a bear cub to come down from a tree over a tiger pin, where it has been stuck for days.

The assistant director of the CARE Foundation says that if the bear does not come down from the tree by late Tuesday night, they will move one of their tigers out of its cage and into a different enclosure. The hope is that once the tiger is out of the cub's sight, it will finally come down and run back into the wild safely.

"[The tigers] are really well trained. They come when they’re called and they get shifted around every single day so it’s really pretty easy for us to do," Hayn said.

They've avoided moving the tiger so they didn't disrupt her routine.

But now, they say they want to put the bear at ease, so FWC doesn't have to step in.

"Let nature be nature before we have to finally add to it," Hayn said.

Florida Fish and Wildlife (FWC) officials are going to wait and see if the cub will come down from the tree on the property before they take any additional measures.

The cub is not a "resident" of the refuge but has found its way onto the tree over the tiger enclosure, where the two tigers "Daenerys" and "Tyrion" are housed.

After being up there for several days, the bear is starting to get tired and restless, wildlife officials say. He is slumped over and is lower on the tree than it had been.

"He has no idea that [the tigers] can’t get to him. He’s never seen anything like this before. So yeah, I would be terrified too if I came across that," Hayn said.

"I knew because the tiger Daenerys kept walking over to me, walking back overlooking at the tree -- it happened three or four times. Eventually, I took the hint and walked over and saw the bear cub in the tree."

The founder and director of the refuge, Christin Burford, is concerned that the cub could fall, breakthrough a protective fence and bring harm to the animal.

"They [FWC] think the bear is going to come down when it's hungry enough and thirsty enough," Burford said. "But fear plays a big part of it and the little guy is obviously afraid of the tigers. The tigers know it's up there, so it's kind of a waiting game at this point. If he actually touches, makes contact in the area where the tigers are living, he could get bit."

FWC is holding off on stepping in, hoping the bear will come down on his own.

If FWC were to remove the cub, CARE Foundation officials say it might require them to put the cub in captivity temporarily, which they want to avoid.

FWC will be back Wednesday to monitor the situation if the bear still has not come down.