The six-day sting targeted prostitution, human trafficking and child predators – busting 124 people. The charges included: solicitation, using a computer to lure a child and traveling to meet a minor for sex.

Among those arrested include: 53 prostitutes or victims of human trafficking; 46 johns; 7 child predators; and 18 others were arrested for other charges, including aiding, transporting and deriving proceeds from prostitution, according to Polk County Sheriff Grady Judd.

During a Wednesday morning press conference, Judd explained counselors were immediately available for those who appeared to be human trafficking victims.

"Two young ladies never had a criminal arrest," he said. "They immediately agreed to those services. Five others, we have a real strong possibility that they are currently trafficking victims." 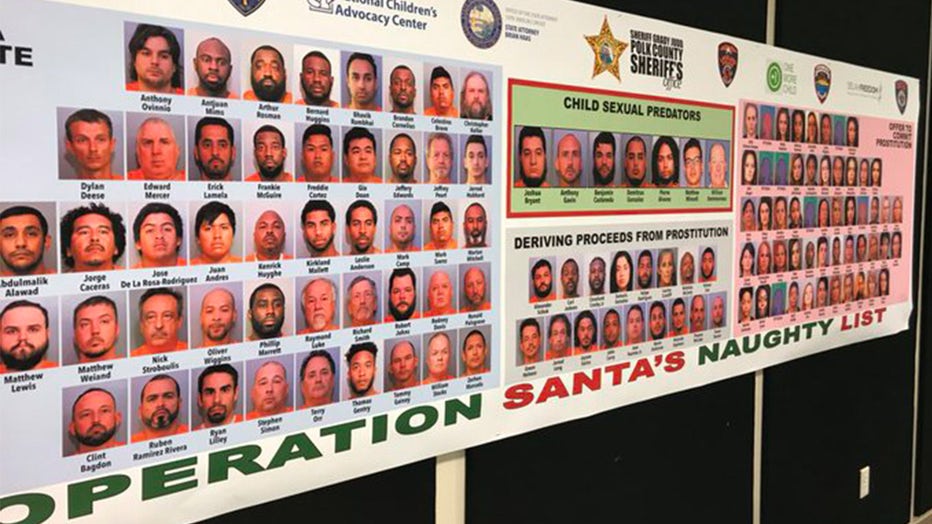 Judd added that the "laws of the state of Florida are beautiful." The victims who accept the help and resources can have their prostitution past wiped out from the court system and "live out their lives as citizens."

He said out of the group that was arrested, there were a total of 443 previous felony charges and 571 misdemeanor charges. Judd said 30 suspects told detectives they were married, and one said he was engaged.

The sheriff said one suspect, 56-year-old Rodney Davis, even showed up "butt-naked." He worked as a Disney security guard.

“He didn’t have a stitch of clothes on but he was carrying a shirt. He walked into the house," Judd said. "He was proud of himself. That’s up for debate.”

Investigators said the shirt he could be seen holding in the video was his Disney uniform.

Judd mentioned other details from the operation:

Two victims are suspects who brought their children to the undercover sting -- ages 3 and 5.

"They brought their children while they turned tricks," Judd said.

One of the ladies who showed up had a baby just 10 days ago, he added. Another was pregnant.

The seven child predator suspects who were arrested are all men. Five traveled to the operation with the intent to “sexually batter a child,” Judd said. Two others used a computer to communicate with a teenager.

The sheriff said they believed they were talking to a 13-year-old or a 14-year-old -- either a boy or a girl -- but, in fact, they were speaking to an undercover detective.

One brought "equipment" to use on the fictitious 14-year-old boy, and one other suspect brought a Viagra pill without a proper prescription, Judd said.

"So that's another criminal charge," he said.

Full details on the seven child predator suspects can be found below:

Anthony Gavin, 33, of Davenport: He thought he was chatting online with a 14-year-old boy when he said, "I don't wanna be labeled a pedophile." Gavin brought condoms to the location and when he was arrested, he told detectives that he was there, "because I'm stupid."

Pierre Alvarez, 21, of Davenport, Florida: He believed he was communicating online with a 12-year-old girl. He sent nude photos of himself and discussed what he would like to do to the girl. Alvarez rode his bicycle to meet the girl and had a condom in his pocket when he was arrested.

Demitrus Gonzalez, 26, of Davenport, Florida: He contacted an undercover detective, thinking that he was chatting with a 14-year-old boy. Gonzalez drove to the operation and brought lubricant, condoms, and Xanax with him. While being arrested, he bit a Lakeland Police Officer on the hand.

Joshua Bryant, 23, from Brandon, Florida: He thought he was talking to a 14-year-old boy online and sent three nude photos and tried to arrange to pick up the boy. Bryant told the boy to sneak out of the house and that he could hide at Bryant's house if he was reported missing. After arriving at the location, Bryant got suspicious and collided with an undercover vehicle as he was trying to drive away.

Benjamin Castaneda, 24, from Orlando, Florida: He made contact with what he thought was a 13-year-old girl online. In his texts, Castaneda wasted no time telling the undercover detective what he wanted to do with the girl. He drove to the location and arrived less than two hours after making initial contact and was arrested.

Matthew Minardi, 22, from Palm Harbor, Florida: He began a sexually explicit conversation via social media with who he thought were two different 13-year-old girls, but both were actually undercover detectives. Minardi also sent a nude image of himself. He did not travel to the operation location, but was located and arrested by the Pinellas County Sheriff's Office

William Stemmermann, 53, from Kissimmee, Florida: chatted with and called an undercover detective, thinking she was a 13-year-old girl. He attempted to arrange to meet and requested photos to be sent to him. Stemmermann did not travel to the operation location but was located and arrested in Kissimmee.

It’s the second time this year the Polk County Sheriff’s Office nabbed more than 100 offenders in under a week. In May, more than 150 suspects were arrested in a similar undercover operation.

Florida is the country’s third largest hub for human trafficking. Last year, the Department of Children and Families received more than 2,600 reports of commercial sexual exploitation of minors – leading detectives to identify more than 400 child victims.

Near the end of the press conference, Judd said there will be another sting.

"We’ll put more people in jail," he said. "We’re going to lock you up if you come to this county and violate the law and take advantage of these ladies.”

The full press conference can be viewed below: