At least 12 killed after jetliner crashes in Kazakhstan

Officials said 54 people were reported hospitalized with injuries, at least 10 of them in critical condition.

ALMATY, Kazakhstan - A jetliner with 98 people aboard struggled to get airborne and crashed shortly after takeoff Friday in Kazakhstan, killing at least 12 people, authorities said.

The aircraft's tail also struck the runway twice during takeoff, indicating that it struggled to get off the ground, Deputy Prime Minister Roman Sklyar said. 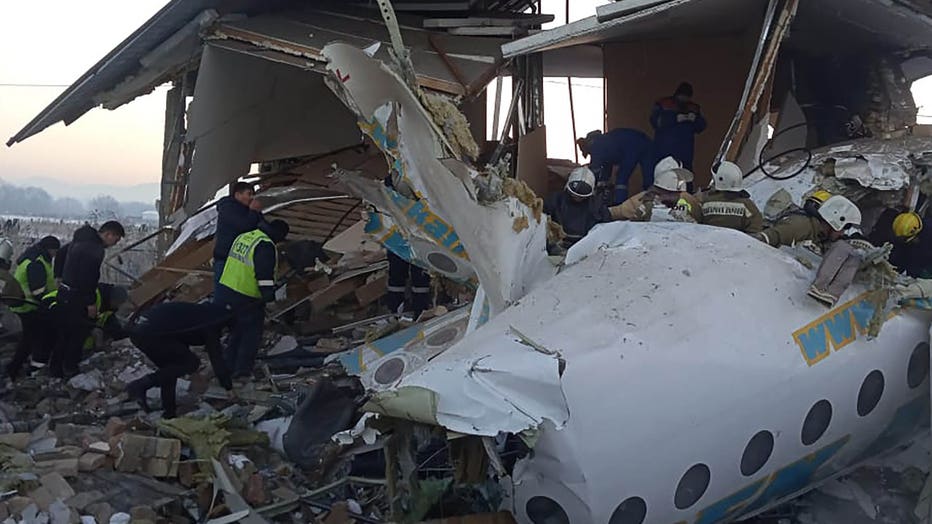 The site of a crash of a Bek Air plane carrying 98 people near Almaty Airport in Kazakhstan. (Photo by TASSTASS via Getty Images)

Fifty-four people were reported hospitalized with injuries, at least 10 of them in critical condition, officials said.

The cause of the predawn crash was unclear. Authorities quickly suspended all Bek Air and Fokker 100 flights in Kazakhstan while the investigation got underway.

One survivor said the plane started shaking less than two minutes after takeoff.

“At first, the left wing jolted really hard, then the right. The plane continued to gain altitude, shaking quite severely, and then went down,” Aslan Nazaraliyev told The Associated Press by phone.

Government officials said the jet underwent de-icing before the flight, but Nazaraliyev recalled that its wings were covered in ice, and passengers who used emergency exits over the wings slipped and fell. The weather in Almaty was clear, with temperatures just below freezing. The plane was flying to Nur-Sultan, the capital formerly known as Astana.

Video footage showed the front of the broken-up fuselage rammed against a building and the rear of the plane lying in a field next to the airport.

Passengers who survived may have been saved by the fact that the plane crashed at a lower speed and from a lower altitude because it was taking off, and it came down in terrain that may have eased the impact.

“The lower the speed, the lower the energy, and the fact that it lands on things that might not tear it up so much" all play a role, said Adrian Young, senior aviation consultant at the To70 consultancy in the Netherlands.

The plane built in 1996 included safety features that have increased passenger survival chances since the mid-1980s. Those features include stronger cabins less likely to crush or break apart and interior materials less apt to catch fire or emit toxic smoke.

“The more modern the aircraft you are sitting in, the better chance you have of escaping the accident,” Young said.

Officials in the Almaty branch of the health ministry could not explain why the figure was revised. They attributed the confusion to “agitation” at the site of the crash.

In a statement on its Facebook page, the airport said there was no fire, and a rescue operation began immediately.

Around 1,000 people were working at the snow-covered crash site. Dozens more in Almaty lined up at a local blood bank to donate for the injured.

The government promised to pay families of the dead around $10,000 each.

The Fokker 100 is a mid-sized, twin-engine jet. The company that manufactured it went bankrupt in 1996, and production stopped the following year.

Kazakh President Kassym-Jomart Tokayev ordered an inspection of all airlines and aviation infrastructure in the country. Eighteen passenger airlines and four cargo carriers are currently registered in Kazakhstan, a former Soviet republic.

Kazakhstan's air-safety record is far from spotless. In 2009, all Kazakh airlines — with the exception of the flagship carrier Air Astana — were banned from operating in the European Union because they did not meet international safety standards. The ban was lifted in 2016.