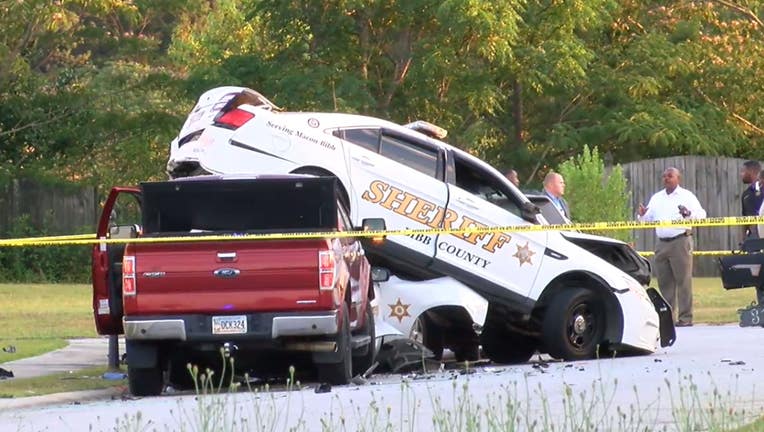 A man wanted for kidnapping rammed his pickup truck into Bibb County deputy patrol cars on May 19, 2020 (WGXA). (WGXA)

BIBB COUNTY, Ga. - The Bibb County coroner said the man accused of taking three children after getting into an argument with his estranged wife is dead, according to reports. Deputies said they were forced to open fire upon the pickup he rammed into two patrol cars. The three children have reportedly been found safe.

Bibb County Sheriff David Davis told WGXA the incident started around 5:30 p.m. Tuesday at a home along Karlee Dawn Road in a South Macon. The sheriff said the man, identified as Keith Young, tied up his estranged wife and took his three children.

The woman was able to free herself and flee to a nearby friend's home where she called 911. Sheriff Davis said a short time after his deputies arrive, Young, driving a red Ford F-150, returned to the neighborhood, spotted the cruisers, and suddenly sped up, ramming the deputy's cars.

The sheriff said the deputies opened fire on Young, striking him at least once. He was rushed to an area hospital where he later died.

One deputy was injured and the sheriff said she was receiving treatment.

An intensive search was on-going for several hours for the three children, but just before 10:30 p.m., WGXA reported the children were found safe at a relative's home.

The sheriff said he will ask the Georgia Bureau of Investigation to investigate the officer-involved shooting.